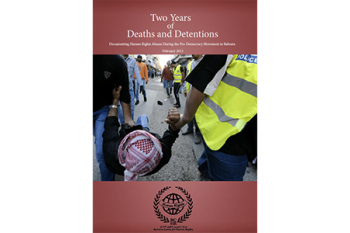 The Bahrain Center for Human Rights publishes a second anniversary report: Two Years of Deaths and Detentions Documenting Human Rights Violations During the Pro-Democracy Movement in Bahrain FOR IMMEDIATE RELEASE

(Copenhagen) – The Bahrain Center for Human Rights (BCHR) publishes their Second Anniversary Report Two Years of Deaths and Detentions, Documenting Human Right Abuses During the Pro-Democracy Movement in Bahrain. It is a quarterly edition of the continuing documentation of human rights violations in Bahrain following the start of the pro-democracy movement on February 14th, 2011. This report aims to document the nature of King Hamid bin Al-Khalifa’s reaction to the pro-democracy movement in Bahrain. The Bahrain Center for Human Rights is committed to documenting the ongoing human rights violations, and to provide a clear record of the violent and repressive conditions that characterize life for many of the people in Bahrain. According to this report, there remain to be no meaningful improvements made to the human rights situation in Bahrain. The findings in this report even show that on many levels the situation has become more serious. In the two years that the pro-democracy movement has been ongoing, 87 individuals have died as a direct result of the excessive use of force applied by the King’s brutal security forces, including 13 children under the age of 18. As this report details the deaths and detentions that dominate the government’s appalling repression of democracy, the BCHR asks how long will the West continue to support these atrocities? http://bahrainrights.hopto.org/BCHR/wp-content/uploads/2013/02/Second-Anniversary-Report-Published.pdf