Bahrain: High School Student Sentenced to One Year Imprisonment for a Tweet 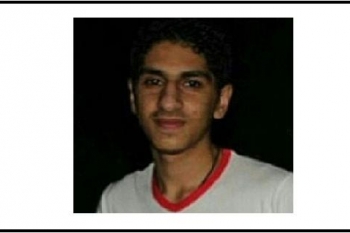 The Bahrain Center for Human Rights expresses concern in regards to the ongoing crackdown on freedom of speech on the internet, as another twitter user receives prison sentence.

Ali Al Shofa was arrested in a house raid at dawn on 12 March 2013. He was kept in detention for two months pending investigation, until he was released on bail of BHD 100 on 8 May 2013 while still on trial. Ali was accused of posting an insulting tweeting using the account @alkawarahnews, which he denied relation with, and his lawyer Merfat Janahi submitted evidence that the account is still running by other persons.

The BCHR again points to the blatant absence of any form of independent or fair judiciary system according to international standards; as the judge presiding in the case stems from the same family as the king, the subject of the lawsuit.

Last month, on 15 May 2013, the court sentenced five other twitter users to one year imprisonment each, also on the charge of insulting the king on twitter. (Details on http://bahrainrights.org/en/node/6122). In total, more than 106 months of imprisonment were collectively delivered since June 2012 against twelve online users for charges related to freedom of expression on social network websites. Said Yousif AlMuhafdha, Head of Documentation and Monitoring at the BCHR and acting Vice President, has a case pending in court for disseminating false news on Twitter. He was acquitted by the court, but the public prosecution appealed the acquittal, and the trial will resume on 1 July 2013.

Earlier this month, the BCHR reported the abduction and incommunicado detention of online user Jaffar Al-Demstani on 20 June 2013 for tweeting about the torture of his father, Ebrahim Al-Demstani. (Read more on http://bahrainrights.org/en/node/6188).

The ongoing crackdown on online users and the use of the judicial system to limit their freedom of speech is in direct violation with the Universal Declaration of Human Rights, Article 19: “Everyone has the right to freedom of opinion and expression; this right includes freedom to hold opinions without interference and to seek, receive and impart information and ideas through any media and regardless of frontiers.”

Based on the above information, the Bahrain Center for Human Rights demands that the Government of Bahrain: