Bahrain: Acquittal of Officers Accused with Torture of Medics 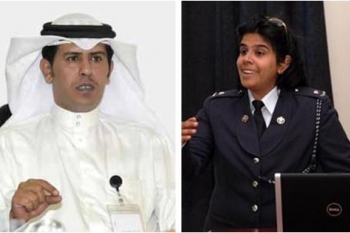 The Bahrain Center for Human Rights expresses grave concern in regards to the acquittal of two police officers who were accused with the torture of Bahraini medics.

On 1 July 2013, the third higher criminal court acquitted Lt-Colonel  “Mubarak ben Huwail”, Director of Drug Detection, on charges of torturing doctors Basem Dhaif, Ghasan Dhaif, Ahmed Omran and Sayed Marhoon Alweda’ai during their detention in March and April 2011. The court also acquitted Lieutenant “Noora Bint Ebrahim Alkhalifa”, a member of the ruling family, from the charges of torturing female doctors Zahra AlSammak and Kholod AlDerazi during their detention in March and April 2011.

Some of the recorded testimonies against Noora AlKhalifa and Mubarak Bin Huwail:

Dr Ghasan Dhaif: “At the CID, I was severely beaten by a woman from the ruling family on every part of my body by kicks, plastic hose and sticks. She slapped me on my face and punched me. I fainted for a while, then they splashed my face with water and I regained consciousness. My face was soaked with blood from my mouth and nose. Then, I was taken into an office where I was tortured physically and verbally about my religious beliefs; and I was not allowed to talk. I asked for my lawyer and family but was given the reply, “when you go to graveyard”. I was interrogated for 30 minutes, and asked about my family, job duties at the hospital, my income and my involvement with the protesters. I clearly stated that I am a doctor and was doing my duties and responsibilities at the hospital solely. The interrogator forced me under torture and abuses to accept charges against me, all which I denied but forced to confess under threat and torture. I was given papers to sign without allowing me to read them. I was kept standing for that night and I was hearing my brother Dr Bassim screaming while under torture.” Full testimony on http://www.doctorsinchains.org/?page_id=235

“The principal investigator, Maj Mubarak bin Huwail, tortured us. He blindfolded and handcuffed us during the interrogation. He wrote whatever he wanted to write and then took our signatures on the false statements by beating us. We were humiliated, intimidated and degraded.” – Rula AlSafar, the nursing society chief who was arrested on April 4, 2011.

One of the torture victims at the hands of Noora Alkhalifa was doctor Fatima Hajji, (34 years old), an Internal Medicine and Rheumatology specialist. On the 17th of April, Noura Alkhalifa and 25 masked men attacked Dr. Haji’s flat in the village of Bani Jamra and arrested her. During interrogations Noora demanded that Dr. Fatima confess, when Dr. Fatima said she had done nothing but treat patients Noura replied “If you do not confess I will have to torture you the way I tortured Doctor Ali Al-Ekri.” She added that detainees Roula Al-Saffar and Ghassan Dhaif had already confessed. Noura started slapping and cursing Dr. Fatima continuously for about 25 minutes. Then she used a hose to beat her on her feet. When Noura Alkhalifa looked through Dr. Fatimas blackberry and saw two emails, one to Human Rights Watch about her suspension and the other about Ahmed Shams (child victim of extra judicial killings) she shouted at Dr. Fatima “How dare you ruin the image of our government”, then electrocuted her in her head. Dr. Fatima was told to confess that she had pretended to cry in front of foreign media, and that she had stolen 100 bags of blood from the blood bank and given it to protesters to spill on themselves and pretend to be injured. She was forced to sign a confession after being threatened with rape. Fatima was also sexually harassed by men under the supervision of Noura. She was forced to stand on one leg, make animal noises, sing and dance.  Dr. Fatima was not even able to prosecute her abuser. A case was filed against Noora Al-Khalifa, but was dropped after the first hearing. (The full testimony can be found here: http://www.doctorsinchains.org/?page_id=160)

Twitter users circulated photo of the Bahraini Prime Minister, Khalifa bin Salman AlKhalifa, visiting Mubarak bin Huwail after the news of the acquittal. A blatant show of support to those accused with torture and reinforcement of impunity.

Last week, on 24 Jun 2013 another Bahraini court acquitted a policewoman, Sarah Moosa, from charges of torturing the France 24 Correspondent Nazeeha Saeed in May 2011. Having reported on pro-democracy demonstrations held at Bahrain’s Pearl Roundabout in the spring of 2011 and bearing witnesses to an extra judicial killing, Saeed was called into a Bahraini police station for questioning in May 2011. There, she was blindfolded, kicked, punched, and slapped. Her hair was pulled, she was whipped with plastic tubing, had a shoe forced into her mouth and her head dunked into a toilet. An unknown, caustic liquid said to be urine was poured onto her face, she was repeatedly insulted and mentally abused and asked to make a false confession. Three independent medical reports, two of which were from Bahraini government doctors, corroborated Saeed’s account of the torture she endured while in custody.

The BCHR believes that the policy of impunity is clearly practiced by the Public Prosecution and the Judiciary in Bahrain, and it is a systematic policy implemented at the highest levels of government. It is also clear there was no implementation of the recommendations related to holding all those responsible for violations of torture accountable according to their hierarchical position of responsibility, and which is a clear recommendation stated in the Bahrain Independent Commission of Inquiry report. These acquittals come only one day after the EU-GCC Ministerial meetings in Manama; an event which due to lack of international accountability, unfortunately enables this culture of impunity in Bahrain.

It is important to note that the visit of the United Nations Special Rapporteur on Torture was effectively cancelled by the Government of Bahrain, which was due to take place in May 2013 http://bahrainrights.hopto.org/en/node/5720.

Based on the information provided above, the Bahrain Center for Human Rights calls for: