Bahrain: Arrest of Lawyer after Tweeting about Torture of Detained Blogger 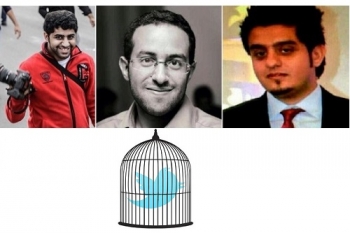 Confirmed information on the torture of social media activists in detention

The Bahrain Center for Human Rights expresses grave concern in regards to the recent news of the reported torture of a blogger who was held incommunicado as well as the escalation in arrests and prosecution of people for their tweets in Bahrain, the latest case being the lawyer who tweeted about torture.

Blogger Mohamed Hassan (known on twitter as @Safybh) has reportedly been subjected to torture in detention. His lawyer, AbdulAziz Mosa informed BCHR that he was able to see marks of beatings on Hassan’s arm, and that Mohamed stated that he was beaten at the Criminal Investigation Department on his back and lower abdomen.  Hassan made this statement during the interrogation session at the public prosecution that started at approximately 2:30 am on the 7th of August and lasted for more than 3 hours. Hassan said that he was forced to confess under mental and physical coercing. Hassan was interrogated about his online activities, participation in seminars and forums outside Bahrain, and his contacts with media reporters who visit Bahrain.

Blogger Mohamed Hassan was arrested from his home at around 3am on 31 July 2013. He was held incommunicado for over three days with no access to family or lawyer. On 3 Aug he was transferred to the Dry Dock Prison.

14 hours after lawyer AbdulAziz Mosa (@AbdulAzizMoosa) tweeted about seeing the marks of beating on Mohamed Hassan, Mosa’s home was raided in the village of Muqshaa, he was arrested and his personal computer was also confiscated. The public prosecution stated that Abdulaziz will be detained for one week pending further investigation, and is charged with “the publication of defendant’s names without permission and the disclosing of investigation secrets”. It should be noted that the publishing of names and photos of defendants has been the norm for the Government of Bahrain, and no one has been held accountable for publishing or broadcasting names and photos of political prisoners before conviction on state media outlets. The government even went to the extent of broadcasting a confession taken under duress of a political prisoner on Bahrain state television after he was tortured to death. (More details: http://bahrainrights.org/en/node/3976 )

The arrest of Mohammed Hassan was soon followed by the arrest of award winning photojournalist Hussain Hubail who was also taken to public prosecution for interrogation along with blogger Mohamed Hasan on the 7th of August. Hubail was arrested on the night of 31 July 2013 from the airport and he was held incommunicado for over four days until he was moved to the Dry Docks prison on 5 August where he called his family from.

Hussain Hubail’s lawyer, Ali AlAsfoor, said that Hubail was interrogated about his work as a photojournalist and his connection to some twitter accounts that are linked to the Bahrain “Tamarrod” [Rebellion] protests planned on Aug 14. During the time of the interrogation at the public prosecution, security forces raided the home of Hubail and confiscated his camera and laptop.

According to confirmed information received by BCHR, Hussain Hubail was reportedly subjected to torture at the Criminal Investigations Department (CID), office number 99. He was reportedly beaten and kicked in the abdomen and face, placed in an extremely cold room, forced to stand for long periods and deprived of sleep during the entire period he spent at the CID (approximately four days).  He reported this to the public prosecutor during his interrogation.

In addition to Mohamed Hassan and Hussain Hubail, other people are accused in the same case and they have been charged with: “participating in the administration of accounts that call for regime overthrow, promoting and inciting hatred against the regime, inciting to not amenable to the laws and calling for illegal rallies and gatherings”. Mohamed Hassan was accused with contributing to the twitter account of the Feb 14 media network (@Feb14Media).

One of the defendants in the case is Jassim Mohamed AlNoaimi (@Jsnoaimi) who was arrested on 31 July 2013 during a house raid, and had his mobile and computers confiscated. He is currently being held at the Dry Docks prison after he was given 45 days detention pending investigation.

n 7 August 2013, the Ministry of Interior issued a statement related to the same case in which it stated that it had arrested a group of people on charges of “creating and operating websites that calls for the overthrow of the government using illegal means such as rallies that end in violence and vandalism. This disrupts the security and safety of the citizens and residents of Bahrain and disturbs the peace.” The statement included that the arrest of others is still ongoing. The BCHR believes that other social media activists will be arrested as part of this campaign.

This escalating crackdown on freedom of the internet comes days after the National Assembly recommended harsher penalties for those who use social networks to express opposition views or what the government deems “illegal activities”. (More information: http://bahrainrights.org/en/node/6263 )

The Bahrain Center for Human Rights believes this crackdown is intended by the authorities in the lead up to 14 August when protests are planned, to control information and news. This is a direct violation of Article 19 of the Universal Declaration of Human Rights: “Everyone has the right to freedom of opinion and expression; this right includes freedom to hold opinions without interference and to seek, receive and impart information and ideas through any media and regardless of frontiers.”

In the past months, more than 106 months of imprisonment were collectively delivered against 12 online users since June 2012. Photographer Ahmed Humaidan remains in detention pending trial since 29 Dec 2012, while photographer Hasan Matooq is serving a three years prison sentence since 24 March 2011 for taking photos of injuries during the events of 2011 protests.

The Bahrain Center for Human Rights calls on the United States, the United Kingdom, the UN, and all other close allies and relevant international institutions to apply real pressure on the Government of Bahrain to: