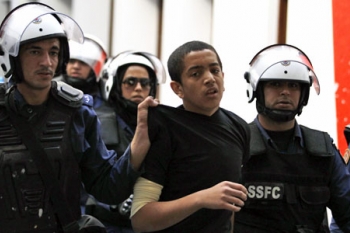 Mahmood has not slept at home in eight months. His younger brother has not slept there in a year. But armed riot police continue to raid their family home monthly, breaking down bedroom doors searching for them.

Mahmood and his brother are wanted by the government of Bahrain. They have been charged with various forms of involvement in  anti-government protests, which for the past two and a half years have pinned the kingdom’s Shia majority against the ruling Sunni minority. The Ministry of Interior’s police forces are currently searching Bahrain’s Shia villages for over five hundred wanted young men, according to reports gathered by the Bahrain Center for Human Rights (BCHR). Arrests and raids have intensified in the weeks leading up to Bahrain’s Egypt-inspired Tamarod (rebellion) protests, set for August 14.

“Yesterday, they raided Sitra village for four hours,” says Said Yousif al-Muhaftha, head of documentation and monitoring at the BCHR, referring to a recent police operation. “Do you know how many they arrested? None. Not one. None of the boys are home.”

Wanted boys put a high stake on invisibility. The government tracks the young men using informants and nightly house raids; anywhere Mahmood stands, he risks being seen by government informants and arrested almost instantaneously. He cannot work because going to the Ministry of Labor effectively guarantees arrest. He says he cannot return to school because walking onto campus would make him highly visible. Getting married requires a blood test, and hospitals are off-limits for the wanted. Should he need any kind of medical care at all, seeking hospital treatment could mean years in prison.