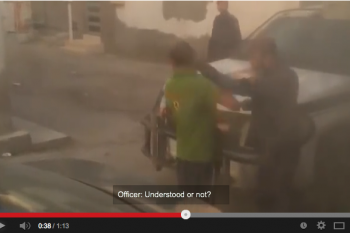 The Bahrain Center for Human Rights is appalled by the blatant disregard to justice by the Bahrain Judiciary that acquitted an abusive policeman despite the presence of videotaped evidence capturing his crime; while having punished the abused victim with detention after he submitted a complaint.

On December 2012, Haider AbdulRasool was subjected to police abuse when he was stopped his neighborhood of Aali by a policeman identified as Ali Aref who slapped him in the face while AbdulRasool was carrying his child in his arms. An anonymous cameraman caught the “slapping” incident on video, which he then published on YouTube. The video went viral and forced the Ministry of Interior to acknowledge the abuse and to announce the beginning of an investigation into the incident[1]. See the full video here: https://www.youtube.com/watch?v=zI_L1rAn4Bw

Subsequently, AbdulRasool spoke to the media and went to court to file charges against the policeman. In January 2013, the lawyer of AbdulRasool stated that he was pressured to drop the case against the police officer and “forgive him”. AbdulRasool was determined to seek justice as he was subjected to humiliation, as was his child who he was carrying in his arms at the time of the incident. However, while a Bahraini court had initially sentenced the policeman Ali Aref on 18 June 2013 to 2 months imprisonment and fined him 50 Bahraini dinars, a court of appeal acquitted him on 30 December 2013 from the charges in blatant disregard to the available video evidence of the abuse which has been viewed by over 600,000 people around the globe.

To add insult to injury, the victim of the abuse, Haider AbdulRasool, was arrested on 22 Sep 2013 during a dawn house raid on his home in the village of Aali[2]. On 24 Sep the public prosecution ordered his detention under the counter-terrorism law. AbdulRasool was kept in detention until the 19th of November 2013 when he was finally released.

It should be noted that online activists have documented other violations committed by the same policeman, Ali Aref, who has been involved in the beating of citizens on the street (see video: https://www.youtube.com/watch?v=Tw4pio5ZbsM)

At the time of incident in December 2012, the Minister of Interior Rashid Al Khalifa condemned in a public statement the behavior of policemen seen in videos and said that “such behaviour was unacceptable and went directly against the Ministry's policies as well as the Police Code of Conduct”[3]. However, the court encourages the abuse by acquitting the responsible policeman proves this abuse matches the ministry’s policies, is not being seen as a crime and reinforces the culture of impunity.

The case of AbdulRasool is a clear cut example of the extent of impunity in Bahrain, where the courts are set up to ignore the clearest evidence to avoid convicting abusive police. BCHR believes that AbdulRasool has been detained as punishment merely for exposing government violations and seeking justice.

The BCHR calls on the United States, the United Kingdom, the United Nations and all other close allies and relevant international institutions to pressure the government of Bahrain to: