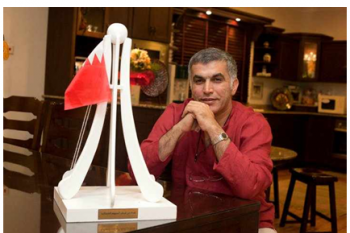 The Gulf Centre for Human Rights (GCHR) and the Bahrain Center for Human Rights (BCHR) expresses grave concern regarding the Bahraini authorities’ treatment of Nabeel Rajab, imprisoned President of the BCHR and General Secretary of GCHR, in addition to their refusal to grant him early release that he is eligible for as per the law. A request for early release was submitted by Nabeel Rajab’s lawyers on 21 January 2014 to the Court but it was rejected without any reasons given.

On 21 January 2014, the penalty enforcement judge once again rejected a request that was submitted on the same day to release leading human rights defender Bahrain Center for Human Rights President Nabeel Rajab. Before passing judgment, the judge reportedly did not a take any action to investigate whether conditions for early release had been met. This is the third attempt submitted by Rajab’s lawyers requesting his release, based on article 349 of Code of Criminal Procedures which sets conditions for early release. These are as follows: three quarters of the sentence has already been served, trustworthy good behavior during detention and the imprisoned person is not a threat to public security. Although these conditions apply to Rajab’s case, all requests submitted by his lawyers were rejected. (See about previous requests on http://bahrainrights.org/en/node/6635)

In the letter submitted to the judge on 21 Jan 2014, Nabeel Rajab’s lawyer provided evidence of his eligibility for early release and complained about the discrimination against Rajab in applying the law of early release, as well as the harm he suffered because of the prolonged delay in responding to his request which was submitted to the Court of Cassation to suspend the sentence.

The evidence provided by Rajab’s lawyer is detailed below:

(Following are excerpts from the letter submitted to the court)

Based on this report, the Public Prosecution began to investigate the matter according to a statement issued by the Chief Prosecutor, Head of the Special Investigation Unit, Nawaf Hamza, on 7/12/2013, published by Bahrain News Agency (BNA) where it stated the Chief Prosecutor’s confirmation, ‘the Special Unit received a report from the sentenced Nabeel Rajab about a number of inmates at the Facility of Correction and Rehabilitation being subjected to abuse by some policemen, and the Unit initiated an investigation into the incident as soon as it received the report’.

This confirms that our client is trustworthy: his statement about the incident corresponded with the investigation carried out by the General Secretariat of Complaints and Special Investigation Unit at the Public Prosecution and which ended with referring the defendants who are members of the public security forces to court.

In this context, it is noteworthy that our client had taken the initiative as soon as he knew about the crime to inform the Administration of Jaw’s Prison about it, however the prison administration did nothing indeed, it interrupted and disconnected our client’s phone call when he was about to tell his wife about the incident, with the aim of conveying the information to his lawyer, so that the latter could inform the official channels on his behalf.

Second: submitting a request from the Prison Warden is not a condition for release:

The law does not require that the release is guaranteed by submitting a request from the prison warden. Article 350 of the Law of Criminal Procedure states that the conditional release is by order of the Judge of Penalty Implementation, on the basis of evidence provided by the Manager of Penal Facilities. Submitting a request from the prison warden is just a matter of regulatory procedure, in cases where the sentenced cannot make a request himself. Thus, it is not a requirement to be eligible for release, as it is inconceivable that legislation would intend to mortgage the inherent right of a sentenced to the will or mood of an administrative body.

Henceforth, the sentenced person can submit a request considering him an inherent right and interest holder, and in this matter the Judge of Implementation asks the prison administration about the whether the detained person has met the aforementioned first and third condition, regarding the behaviour of the sentenced person prison and whether or not he had spent three fourths of his prison sentence.

Note that we had submitted two letters on 9/9/2013 and 25/11/2013,  to the Director of the Correction and Rehabilitation Facility Lieutenant Colonel  Mohammed Rashid Al-Hoseini requesting the conditional release of our client, and for his name to be included  among those exempted from the remaining sentence period, However the prison administration did nothing in that regard.

Third: the availability of evidence of discrimination against our client:

It is confirmed from what has been presented that the prison administration neglected the report submitted by our client regarding the crime committed by its employees, and it also ignored or did not respond to his requests for conditional release or to exempt him from the remaining sentence period. However, and according to information published in the Official Gazette regarding the release of 208 prisoners in October 2013 and the release of 172 prisoners in January 2014, we know that, the administration handles hundreds of releases constantly whether through conditional release or exemption from the remaining sentence period.

Based on the above, it has been proven to your Justice that our client is being subjected to discrimination by excluding him from conditional release provisions or exemption from the remaining sentence period despite the fact that all the prescribed requirements have been met according to the law.

Human rights defenders in Bahrain have shed light on these human rights violations with the aim of putting an end to their  continuation and holding those responsible for them accountable, in order to maintain human dignity and rights as called for by the country’s constitution.

Fourth: persistence to harm our client by postponing the decision on his urgent request to stop the implementation of the sentence against him:

In addition to  the above , at a time when our client is being discriminated against by the prison administration, that is associated with a carelessness in making a decision to stop the implementation of the sentence against him which he submitted to the Court of Cassation in the list of appealing the discrimination in the current sentence that is being implemented; the appeal was submitted on 10/1/2013, more than a year ago, and a court session has not been specified to look into the urgent request to stop the implementation until now, although an urgent request has been made to the Court of Cassation.

Based on the above, we ask of Your Justice, after enquiring from the prison administration about the good conduct of our client and the prison sentence he has already served, to issue a conditional release order for our client Mr / Nabeel Ahmed Rajab immediately.

His lawyer stated that all documents and proofs were submitted with the letter, however, the judge did not  ask the prison administration to confirm the  time that Rajab has already served or about his behavior and  rejected the request on the same day, without providing any justification and without replying to the discrimination complaint.

The GCHR and BCHR believes that Nabeel Rajab is being subjected to discrimination by the Bahraini authorities  and that the reason for denying him the legitimate right to early release is because of his activities as a human rights defender.