Bahrain: Continued Use Of Politicized Judiciary By The Authority To Keep Activist Zainab Al-Khawaja Behind Bars 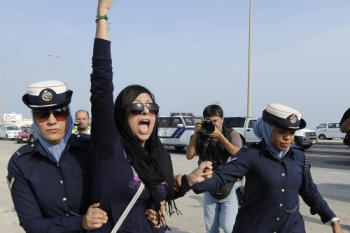 Zainab Al-Khawaja was released from prison on 16 February 2014. She still has many open cases against her, and is scheduled for her next court hearing on 19 February 2014.

The Gulf Center for Human Rights (GCHR) and the Bahrain Center for Human Rights (BCHR) express their deep concern for the on-going targeting of the detained activist and human rights defender Zainab Al-Khawaja by the Bahraini authorities who continue their efforts to fabricate new charges and issuing new sentences that aim at extending her detention period in prison and preventing her from exercising her peaceful work in the field of human rights.

The human rights activist Zainab Al-Khawaja who is spending an imprisonment sentence for several cases in Isa Town Women Prison since 27 February 2013, is subjected to an ongoing judicial harassment that has never stopped. The Criminal Court issued on 27 January 2014 a new sentence in absentia against Al-Khawaja where she was sentenced to 4 extra months of imprisonment in two new cases in which she was accused of destroying property of the Ministry of Interior during her detention at Isa Town police station last May, in an indication to her ripping the photo of Bahrain’s King Hamad Isa Al-Khalifa.

Al-Khawaja mentioned that she was informed about the trial an hour before holding it, and she was only able to call her lawyer 5 minutes before the trial which was not enough time for the lawyer to attend the hearing. Before issuing this sentence, it was set that Al-Khawaja finishes her previous sentence on 24 February 2014.

Zainab Al-Khawaja was arrested on 27 February 2013 to serve a prison sentence for two charges: “entering a restricted zone which is the Pearl Roundabout” and “participating in an unauthorized demonstration”. While in prison, additional prison sentences were issued against her in several cases on alleged charges that include “assembling”, “insulting a public employee” and “ripping the King’s photo” where the total issued sentences against her reached 12 months and which was supposed to end in 24 February 2014. (Please refer to the list of cases and sentences against the activist Al-Khawaja on this link

In addition to the new sentences, Al-Khawaja is still facing another case on the charge of publicly cursing and insulting the police, because of defending another prisoner in June 2013. The First Lower Criminal Court postponed the session from 5 February 2014 to 26 March 2014 to hear the defense witnesses, this is at a time when Al-Khawaja is still boycotting the court sessions in protest against the politicized sentences against her and the blatant disregard for the guarantees of a fair trial and not adhering to the international standards by the Bahraini Courts.

It is also feared that the Bahraini authorities may deliberately stirs further cases again against the activist Al-Khawaja when her release date approaches or in the near future. Noteworthy, Al-Khawaja is suffering from degrading and maltreatment since her detention by depriving her from family visits for several months due to refusing to wear the prison uniform, and then depriving her from going out in the prison yard to get exposed to the sun, and placing her with prisoners who are infected with Hepatitis type A and B, that is without giving her any vaccination against the infection. Last December information was received about her being subjected to humiliating treatment when she had to receive medical treatment at the prisoners’ clinic[1]. She also suffered from a lot of harassments to prevent her from meeting the representative of the Danish Embassy who was forced to wait outside prison for an hour despite having a prior appointment for the visit.

The GCHR and the BCHR believe that ripping the King’s photo is a means of peaceful expression of opinion, and that passing imprisonment sentences by the court under this charge is a direct violation of Article 19 of the Universal Declaration of Human Rights which states, “Everyone has the right to freedom of thought, conscience and religion; this right includes freedom to change his religion or belief, and freedom, either alone or in community with others and in public or private, to manifest his religion or belief in teaching, practice, worship and observance”.

Although Al-Khawaja was legally set to be released on 13 February 2014, according to the official records, but she was not released on this date. Despite constant calls and inquiries by the lawyer, the prison administration kept delaying the processing of her paperwork until after hours. This once again proves the systematic targeting of Zainab Al-Khawaja due to her peaceful and legitimate human rights work.

The GCHR and the BCHR believe that the constant judicial harassments and maltreatment in prison that the human rights activist Zainab Al-Khawaja is being subjected to aims at keeping her for the longest period possible in detention, and which forms a systematic and continuous revenge by the Authorities for her past peaceful activities and her set defense for the rights of the people of Bahrain without any exception. One of the reasons behind these systematic violations is the absence of concrete international pressure on the Bahraini government to compel it to respect the conventions it signed in respect to protecting human rights defenders.

The GCHR and the BCHR urge the international community and especially Bahrain government’s close allies to put pressure on the Bahraini government in order to: