Bahraini photographer Ammar Abdul Rasool, subjected to torture over a photograph he shot 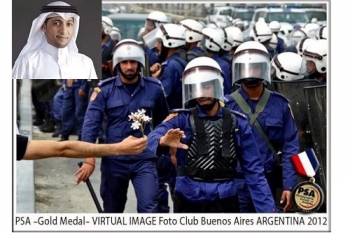 The Bahrain Centre for Human Rights expresses its deep concern over the continuing policy of systematic torture in Bahrain, and particularly the treatment that media professionals face in detention centres.

According to information we have received, detained photographer Ammar Abdul-Rasool  (30), a member of the International Federation for Photographic Art and the Photographic Society of America, was subjected to torture after his arrest during a raid on his home early on Thursday morning (24 July 2014). [Please see the following link for more information: http://bahrainrights.org/ar/node/6980]. He was taken, handcuffed and blindfolded, to the criminal investigations directorate. He remained in that state and was forced to stand up for three days, and was not allowed to pray. Bahrain Centre for Human Rights has been informed that he was severely beaten, and is still suffering from the pain. He was stripped of his clothes, sexually harassed and threatened with electric shocks. He was also told that his wife and infant daughter would be brought to the criminal investigations building. On top of all this, Abdul Rasool faced verbal abuse against his family and sect.

It should be mentioned that the investigation Abdul Rasool  was undergoing was related to his work in the media, and particularly to the photograph attached at the top of this report, showing a peaceful protestor giving a police officer a flower. This photograph was taken during the February 2011 demonstrations. This photo has been widely circulated since its publication in 2011, and won a number of international prizes, the most recent of which came weeks before Abdul Rasool’s arrest.

Abdel Rassool reported that he was put under pressure in an attempt to force him to sign a confession for a crime he was not being investigated for: photographing and videoing clashes between police and protestors, and taking part in rioting.

According to BCHR’s information, Abdul Rasool was taken before the general prosecutor on 30 July, where he was ordered to be detained for 45 days on a charge of illegal gathering. On 27 August 2014 he was transferred to a court, without his lawyer’s being informed, and proceeding began on charges of illegal gathering, rioting and throwing Molotov cocktails. The next sitting will be held on 10 September 2014.

Reports of the detained photographer Abdel Rassool’s torture confirm a vicious campaign of repression by torture, led by authorities against freedom of opinion and expression. His torture also confirms the targeting of media activists; the detainees whose names have been registered with Bahrain Centre for Human Rights now include six photographers. Two others have been killed outside the legal framework, and eight were targeted with live ammunition and shotgun fire.

Bahrain Centre for Human Rights is of the opinion that the detention and targeting of photographers is a clear violation of international pacts and pledges protecting the freedom of opinion and expression. It also violates Article 19, which stipulates that “every human being has the right to freedom of expression. This right includes the freedom to seek, receive and impart them to others regardless of frontiers, either in written or printed form or through any artistic form or any other chosen media.”

Based on what has already been mentioned, Bahrain Centre for Human Rights called on the United States, the United Kingdom and all other close and relevant international allies to do the following: