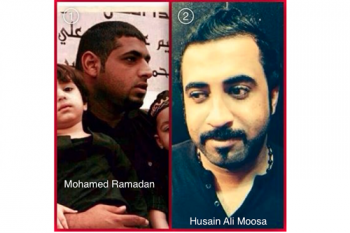 30 December 2014 - On 29 December, a Bahraini court sentenced Mohammed Ramadan and Husain Ali Moosa to death for their supposed involvement in a bomb explosion in al-Dair on 14 February 2014 that resulted in the death of a policeman. Americans for Democracy and Human Rights in Bahrain (ADHRB), the Bahrain Center for Human Rights (BCHR), the Bahrain Human Rights Observatory (BHRO), and the Bahrain Institute for Rights and Democracy (BIRD) vehemently condemn the death penalty sentences against the Bahraini nationals amid concerns that their convictions relied heavily on evidence extracted by means of torture.

On 20 March 2014, Bahraini security officers arrested Mohammed Ramadan without presenting an arrest warrant. The government transported him the General Directorate of Criminal Investigation (CID) building without informing his family of his arrest. Upon arrival, Ministry of Interior (MOI) employees reportedly threatened Ramadan with torture if he did not confess to being a traitor. Shortly thereafter, officers began torturing him.

Mohammed Ramadan was reportedly subjected to sustained ill-treatment and torture for more than four days. In order to halt the abuse, he signed a false confession stating that he was involved in the explosion in al-Dair. Ramadan claims he was then informed that the government knew he was not involved in the charges against him, but that his participation in protests and other political activities made him a traitor and therefore he deserved to be sentenced for his crimes. When Ramadan attempted to explain that he was forced to sign the false confession to a judge, the court remanded him to Riffa Police station for 13 days, where he was reportedly blindfolded, tied up with belts, and tortured once again.

Security forces arrested Husain Ali Moosa one week after the al-Dair bombing. He was housed at the CID, where he claims security officials hung him from the ceiling for three days while beating him with batons. Moosa reports that CID officers threatened to harm his relatives and fabricate cases against them, and additionally threatened to rape his sisters. In order to stop his torture, Moosa confessed to being involved in the al-Dair bombing. Three days later, CID forces transferred Moosa to the Office of the Public Prosecutor, where he recanted his confession. As a result, he was again transferred to the CID, where security forces allegedly tortured him for three months.

While Moosa and Ramadan are the only defendants who received the death penalty, ten others were tried in connection with the Al-Dair bombing. Mohamed Mekki Ali was sentenced to life imprisonment, while nine other individuals also charged with involvement in the explosion have been sentenced to six years.

“Although the defendants emphatically claim that their confessions were extracted under torture, Bahrain’s courts failed to consider their claims or even open an investigation,” said Mohammed al-Tajer, Ramadan’s lawyer and the Secretary General of BHRO.  “Instead, the Bahraini judicial system utilized its anti-terrorism law to justify the death penalty in a case with no concrete evidence of their guilt, but abundant evidence of ill-treatment, torture, and politically motivated charges.”

“The international community demonstrated consensus on Bahrain’s human rights record when it made recommendations towards putting an end to torture and establishing an independent judiciary during Bahrain’s Second Universal Periodic Review in 2012,” said Nabeel Rajab, President of BCHR. “As the human rights situation in Bahrain continues to deteriorate, the international community must take active measures towards the realization of its decision.”

“As a self-proclaimed exemplar for human rights promotion, the United States cannot overlook the implication of one of its allies condemning to death a prisoner accused on politically motivated charges and convicted utilizing a confession obtained under torture,” said Husain Abdulla, ADHRB Executive Director

“These death penalty sentences present a test for the European Union and the United Kingdom face,” said Sayed Alwadaei, Director of Advocacy at BIRD. “Will the EU and the UK stand by the Union’s guidelines on the death penalty and investigate their relationship with Bahrain or will they continue to be silent in the face of injustice”.

We the undersigned organizations are deeply concerned that Ramadan’s and Moosa’s prosecutions relied substantially on evidence obtained under torture and are in direct violation of Bahrain’s obligations under the Universal Declaration of Human Rights, International Covenant on Civil and Political Rights, and the Convention against Torture. We therefore call on the United Kingdom, the European Union, the United States and other national and international bodies to:

•    Condemn the application of the death penalty against Mohammed Ramadan and Husain Ali Moosa;
•    Call on Bahraini authorities to vacate Ramadan’s and Ali’s sentences and to unconditionally release all political prisoners;
•    Request a full investigation into all credible allegations of torture, as mandated by the Convention Against Torture;
•    Encourage applicable reparations to be awarded to victims of torture as required by the Convention against Torture;
•    Urge the implementation of international regulations against the use of torture as a means to extract false confessions;
•    Entreat the Government of Bahrain to ratify the Optional Protocol of the Convention against Torture; and
•    Urge the Government of Bahrain to replace its anti-terrorism laws with legislation that does not encroach upon citizens’ rights to free expression, association and assembly.