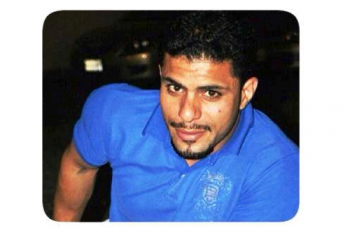 The Bahrain Center for Human Rights expresses its concern over reports of the security forces’ continued practice of torture and degrading treatment as a primary means of extracting confessions from those arrested on politically motivated charges. The family of the detainee Mohsen Ebrahim Al-Majid, 27 years-old, stated that he was subjected to torture and inhumane treatment by security officers during interrogation at the Criminal Investigation Directorate in order to force him to confess to killing a Jordanian policeman in Dimistan village.

In the details of the incident, the family stated that their son had been arrested from his aunt’s house on Sunday 14 December 2014 at 2:00 am police officers and men in civilian clothing; the entire home was searched. Al-Majid was transferred directly to the Criminal Investigation Directorate where he was reportedly subjected to beating and threatened with electrocution. Al-Majid told his family that he was beaten with a wooden plank that had nails in it on his back and hands. On his way to the Criminal Investigation building, police officers directed sectarian insults at him.

Al-Majid also stated that he was interrogated in order to extract a confession to his participation in the killing of a Jordanian police officer in the area of Dimistan village on 11 December 2014. He was threatened with further torture if he refused to confess to the crime. When Al-Majid denied the charges against him, the interrogators took turns beating him until his left ear drum was punctured, and his testicles became swollen from repeated being kicked. After a reported three days of this treatment, and Al-Majid continued insistence on denying the charges against him, the interrogators stripped him of his clothing and sexually harassed him. The officers reportedly threatened to shoot him in the buttocks with a gun. Al-Majid feared for his life, and made a confession to what the officers asked of him. However, despite his confession, the officers continued to beat him. He was transferred to another building where a Jordanian officer and others beat him with a plastic hose and metal parts. Al-Majid was then taken to a municipal building – the same place where the death of the Jordanian gendarmerie policeman took place – where he was dictated the confession and started acting out the incident. He was extremely fatigued and exhausted at this time. Later, in the Public Prosecution Building Al-Majid stated that the Public Prosecutor also threatened to throw a glass bottle in case he decided to deny the charges against him.

Al-Majid has also been a victim of enforced disappearance for nine days. After his arrest, the Criminal Investigations Directorate asked his family not to return to their office after they made several to ask about his whereabouts and well-being. The family went to The General Secretariat for Grievances who in turn visited Al-Majid in detention; however officials did not provide the family with any information about his wellbeing or whereabouts.

Al-Majid is not the first individual to be tortured in the Criminal Investigation Building; the Bahrain Center for Human Rights has documented many cases where people report that they were subjected to torture and degrading treatment in the Criminal Investigation Directorate, in addition to threats made at the Public Prosecution Building, in order to force them to confess to fabricated charges.  In the month of December along, at least 30 individuals have been subjected to enforced disappearance, including Al-Majid, according to the documentation of the BCHR. These disappearances ranged between several hours and 13 days. In addition to this information, international organizations, among them Amnesty International, emphasized that torture in Bahrain is still ongoing concern and there are still prisoners of conscience in prison. The BCHR believes that the security forces’ persistence in using torture had transgressed the international treaties and conventions signed and endorsed by Bahrain, which it has to abide by especially those relating to criminating torture and inhumane treatment.

Based on the above, the Bahrain Center for Human Rights calls on the United States, the United Kingdom, the United Nations and all other relevant international associations and human rights organizations to apply pressure on the government of Bahrain to: