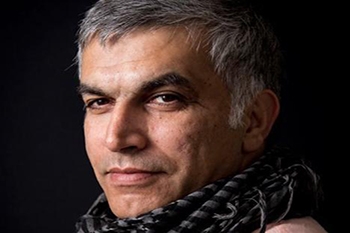 The Bahrain Center for Human Rights condemns the arrest and detention of Nabeel Rajab, a prominent human rights defender in the Kingdom of Bahrain. We call on the Bahraini authorities to immediately and unconditionally release Mr. Rajab and to drop all charges against him.

An update regarding the latest incidents about Nabeel Rajab’s arrest and detention is shown below.

on May 14, 2015 The court of appeal upheld the six-month imprisonment sentence against Nabeel Rajab. [BCHR Statement]

On May 11, 2015 the Bahraini High Court extended Nabeel Rajab´s detention for 15 days.

On May 4, 2015, the appeal verdict for his previous sentence was once again postponed to May 14, 2015. Meanwhile, on May 11, 2015, Nabeel Rajab is to appear in front of the public prosecution for his current charges, and it will be decided whether his detention should be extended or he will be released.

On April 5, 2015, the Court of Appeals held a hearing in the case against Mr. Rajab concerning “insulting statutory bodies”. Though the appeal proceedings had been closed and the verdict hearing had been scheduled for April 15, 2015, the court informed Mr. Rajab's lawyers on April 4, 2015, that the Court had decided to re-open the case after receiving from the Public Prosecution a “supplementary defense memorandum”. The court handed over a copy of that memo to Mr. Rajab's lawyers and adjourned the appeal to May 4, 2015 in order to receive the reply to the Prosecution's memo. According to Mr. Rajab's lawyers, no new material arguments or grounds would justify the re-opening of the case.

On April 3, 2015, the Criminal Investigations Department (CID) regarding two new charges brought against him interrogated Mr. Rajab in the presence of his lawyers. The first charge is “insulting a statutory body” (Article 216 of the Bahraini Criminal Code) referring to the Ministry of Interior in relation to tweets he posted denouncing the torture of detainees at Jaw Prison. The second charge is “disseminating false rumors in time of war” (Article 133 of the Bahraini Criminal Code) in relation to tweets he published about the Saudi-Arabia led coalition air strikes in Yemen. If sentenced on the second charge, Mr. Rajab could be facing up to 10 years imprisonment.

On April 2, 2015, at 4:00 pm, over twenty police cars surrounded Mr. Rajab's house and policemen arrested him on charges of “spreading false news”. The arrest relates to a tweet from Mr. Rajab denouncing the torture of detainees at Jaw Prison. Mr. Rajab was then sent to the General Directorate of Anti Corruption Economic and Electronic Security to be interrogated.

The United States through a statement from the Department of States called on the Bahraini authorities to drop the charges against Nabeel Rajab and to release him immediately.

Coverage by Media, NGOs and the International Community’s Response and Statements about Nabeel Rajab