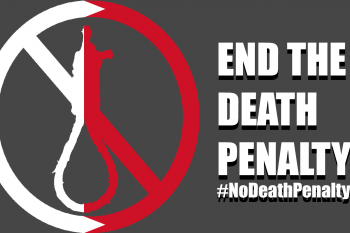 10 October 2015 – On the occasion of the 13th World Day Against the Death Penalty, Americans for Democracy & Human Rights in Bahrain (ADHRB), Bahrain Center for Human Rights (BCHR) and the Bahrain Institute for Rights and Democracy (BIRD) condemn the ongoing use of death sentences in Bahrain and call for the abolition of this practice in the kingdom. In Bahrain, the death penalty is often employed as a means of intimidation. Seven individuals are currently on death row in Bahrain, most of whom were convicted as a result of false confessions extracted under torture. Many of the cases lack any hard evidence linking the individuals to the crimes for which they were prosecuted.

Bahrain’s use of the death penalty has followed a common pattern since 2011. Bahraini courts sentence to death persons who are suspected of killing policemen. These defendants are often subjected to torture, including whipping and electrocution, to coerce a confession. The criminal courts regularly dismiss the defence’s arguments and obstruct their access to an attorney. In 2011, military courts issued five death sentences, which the Bahrain Independent Commission of Inquiry recommended to be commuted. Though Bahrain did so, death sentences continue to be handed down in unfair trials. In a troubling trend this year, the number of detainees on death row has increased by 75 percent since January.

Sayed Ahmed Alwadaei, Director of Advocacy at BIRD: “The death penalty is a big problem in the Gulf. It has been Saudi Arabia’s ultimate tool of political repression for decades. Now we see Bahrain also threaten dissenters with this terrible weapon.”

BIRD, BCHR and ADHRB have consistently documented the torture and unfair trials of Bahrain’s death row prisoners. On 19 February 2014, the criminal court found Maher al-Khabbaz guilty of killing a police officer with a flare gun. The court convicted al-Khabbaz despite the prosecution’s inability to provide tangible evidence of the murder weapon, and inability to rectify the theory of the cause of death with the defense’s forensic report of the officer’s wounds. Al-Khabbaz’s trial is typical of all Bahraini detainees currently awaiting a death sentence.

Husain Abdulla, Executive Director at ADHRB: “Bahrainis on death row have endured humiliation, torture and unfair trials, and now they face the firing squad. No government should sanction the murder of its own citizens, least of all a country with a judiciary as corrupt and dysfunctional as that  of Bahrain.”

The death penalty as practiced in Bahrain is in breach of the International Covenant on Civil and Political Rights (ICCPR), to which Bahrain acceded in 2006. Article 6.1 of the ICCPR states that, “no one shall be arbitrarily deprived of their life.” As the seven Bahrainis on death row were subjected to torture, coerced confession and unfair trial, the sentence is therefore arbitrary, and in violation of Bahrain’s international commitments.

Nabeel Rajab, President of BCHR: “The death penalty violates fundamental human rights. It’s time for Bahrain to join the majority of countries in the world which have abolished the death penalty. We need to build a society based on peace, not violence.”

ADHRB, BIRD and BCHR condemn of the practice of capital punishment in Bahrain, and call on the government to:

Read the statement in French here.

NGOs Condemn Use of Death Penalty Amid Allegations of Severe Torture

The Terrorism Law in Bahrain