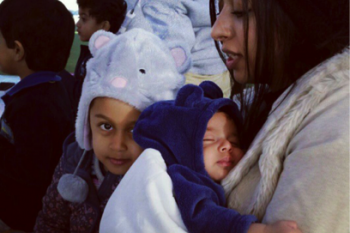 On 21 October 2015, human rights defender Zainab Al-Khawaja could mark her 32nd birthday by beginning combined prison sentences of over five years if several cases against her are confirmed by a Bahraini appeals court. She has been free on bail since she was sentenced last December on a number of charges. This includes a three-year sentence for simply tearing up a picture of the monarch, considered a crime in Bahrain, and a one-year sentence for insulting a public official. Please join the Thunderclap campaign to help wish her a happy birthday and call for her conviction to be quashed so that she and her baby son don’t go to prison.

On 17 November, Zainab is also due in the appeals court after being convicted and sentenced to nine months on charges of entering a restricted area and six months in prison for insulting a public official, while seeking to visit her father Abdulhadi Al-Khawaja in prison in August 2014. Abdulhadi Al-Khawaja, the Co-founder of the Gulf Centre for Human Rights (GCHR) and of the Bahrain Center for Human Rights (BCHR) who is serving a life sentence for his human rights activities, was on hunger strike at the time.

The impact on the Al-Khawaja family has been extreme. Zainab has already spent more than a year in prison apart from her six-year-old daughter Jude; and her sister Maryam Al-Khawaja, GCHR Co-Director, is in exile and also spent almost a month in jail last year.

Families of prisoners of conscience pay a high price in Bahrain, and women human rights defenders are criticized for “abandoning their children.” Yet in this case, Zainab will join the list of other women who have been imprisoned with their children, facing the prospect of being jailed with a baby less than a year old.

Through her actions, Zainab was making a powerful statement to thousands of Bahrainis and human rights activists in the Gulf area and around the world; to whom Zainab (@AngryArabiya) tweeted: “Ripping his pic is a 1st step to let him know that we r not afraid, that we are determined to gain our rights, to live as free ppl #Bahrain”.

In support of the international right to freedom of expression, please join us to proclaim that tearing a photo is #NotaCrime. The GCHR urges supporters worldwide to celebrate this courageous defender’s birthday on 21 October by wishing her #HappyBirthdayZainab and calling for her conviction to be quashed. GCHR aims to show solidarity for Zainab’s right to freedom of expression. Seeking to bring more attention to her case, GCHR asks allies and the international community to support her case and help keep her and her son Abdulhadi out of prison.

Al-Khawaja has thanked supporters on twitter, saying “My love and respect to all the people of Bahrain who continue to sacrifice every day so that someday our children can free. And thank you to all those who stand up and speak out on behalf of the people of Bahrain. You restore our faith in humanity.”

What can you do?

To participate in our campaign please join our Thunderclap campaign at https://www.thunderclap.it/projects/33052-happybirthdayzainab and also weet a message or photo of support to @AngryArabiya and @GulfCentre4HR with hashtags #NotaCrime and #HappyBirthdayZainab, starting on 14 October, a week before her birthday. A suggested tweet is “Wishing #HappyBirthdayZainab and calling for her convictions to be quashed. Tearing a photo is #NotaCrime”

You can also share the teaser for the documentary film “We are the Giant” featuring Maryam and Zainab Al-Khawaja at https://www.youtube.com/watch?v=q1-5zbBqU8E

The longest sentence among the trumped-up charges was handed down on 4 December 2014 when Zainab Al-Khawaja was sentenced to three years in prison and a fine of 3000 BHD (approx. USD$8000) on the charge of ripping a picture of Bahrain’s monarch during a court hearing in October 2014. The fine has not been paid yet. That case goes to court on 21 October to confirm sentencing. Also, on 21 October, three of Zainab Al-Khawaja’s cases will be heard in the Bahrain Court of Appeals. They were postponed to notify the court that her lawyer has withdrawn from the cases, and neither she nor her lawyer will appear in court. Two charges of two-month sentences each were handed down on 9 December for “destroying public property” when she ripped a picture of the King at Budaiyah police station, as well as a charge of allegedly “insulting a public official” (a police officer) for which she was sentenced to one year in prison.

On 17 November, Zainab Al-Khawaja is also due in court to hear the appeal of a nine-month sentence for entering a restricted area at Jaw Prison, for which a bail was paid of US $1325. (The only case with bail up until the appeal). Another case insulting a public official, for which she was sentenced to six months, will also be heard. She was released on bail from prison in November 2014 just prior to giving birth to a son, her second child.

“No one has caused severe discomfort to the government of Bahrain or any of its authorities like the human rights activist Zainab Al-Khawaja has,” said GCHR Co-Director Khalid Ibrahim in a tribute to the Al-Khawaja family. Her courage in defending human rights publicly has cost her freedom, subjected her to judicial harassment, deprived her young son of a birth certificate, and imposed restrictions on her travels outside Bahrain due to the authorities’ continual refusal to renew her passport. The Bahraini government has by such arbitrary and unjust measures violated the basic human rights of this peaceful rights defender and her son.