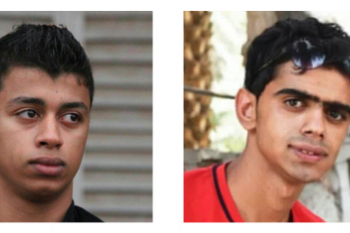 The Bahrain Center for Human Rights (BCHR) is deeply concerned over the Bahraini authorities’ continuous unlawful arrests and use of torture to coerce confessions against citizens, including people with physical disabilities. BCHR has documented the cases of Sadiq Abdulameer Alqamar and Mohamed Hasan Buhmaid, currently detained and awaiting trial.

On March 2015, Sadiq Abdulameer Alqamar (21 years) was arrested in the area of Dar Kulaib together with four other people, and taken to the police station at Hamad Town Roundabout 17. The charges brought against him were placement of unidentified objects, using fake explosives and burning of tires.

According to information provided to BCHR,  Sadiq was subjected to torture during interrogation and was forced to sign a confession of his alleged accusations. He was later summoned to attend the fourth criminal court on 9 May 2016, when he submitted medical reports describing his disability and thus his physical inability to commit the acts listed in his charges. Alqamar has been suffering from extreme weakness in the muscles of his upper limbs since his early childhood; this physical disability means that he has been dependent on others throughout his life for all his daily activities, as stated by his parents.
Despite being identified as a “person with special needs” in the medical report, the judge assigned to his case ordered his arrest. Alqamar is currently detained at Dry Dock prison, awaiting his trial.

Mohamed Hasan Buhmaid (23 years) suffering from hearing impairment and a speech disorder, was arrested from Karzakan village on May 10, 2016 by security forces dressed in civilian clothes. He was taken to the police station at Hamad Town Roundabout 17, but shortly after he got transferred to the General Directorate of Criminal Investigations (CID). Buhmaid was charged with illegal gathering and conducting an attack on a police car. As reported by his family, who had long been unable to get information on the reasons behind his arrest, he has been subjected to food deprivation and to torture under interrogation, including being forced to stand for long hours, and beaten, kicked and slapped each time he would move. Buhmaid was forced to sign a confession of his alleged accusations while being blindfolded. Similarly to Alqamar’s case above, he is currently in Dry Dock prison awaiting trial.

BCHR draws the alarm on governmental actions subjecting people with physical impairments to arbitrary arrest and torture. Moreover, BCHR draws attention on the authorities’ disregard of medical evidence supporting these two young men claims of innocence in relation to their charges, based on their physical disabilities.

This is not the first time BCHR document cases of this kind. The continuation of violations against  detainees with special needs is an indication of lack of  any significant improvement to the treatment of disabled persons arrested in Bahrain.

The Bahrain Center for Human Rights calls on the government of Bahrain to:

BCHR is pleased to announce that Mohamed Hasan Buhmaid and Sadiq Abdulameer Alqamar have been released. Sadiq is, however, still on trial.

We remain deeply concerned about the faith of the those political prisoners still trapped into the Bahraini penal system.