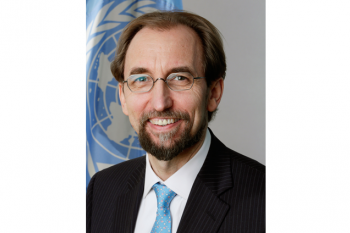 13 June 2016 - The UN High Commissioner for Human Rights today warned that repression "will not eliminate people's grievances" in his opening statement at the 32nd UN Human Rights Council session, in a statement welcomed by the undersigned NGOs.no

High Commissioner Prince Zeid bin Ra'ad Al-Hussain stated: At least 250 people in Bahrain have reportedly been stripped of their citizenship by the Government because of their alleged disloyalty to the interests of the Kingdom. In addition to these severe restrictions on freedom of expression, which contravene Bahrain’s international human rights obligations, an indefinite ban on gatherings in the capital has been in place since 2013. Dozens of people – including minors – have been prosecuted for participating in protests. Repression will not eliminate people’s grievances; it will increase them.

We welcome the High Commissioner's strong words, which come on the same day that Nabeel Rajab, President of the Bahrain Center for Human Rights, is unfairly arrested. Last week, human rights defender Zainab Al-Khawaja went into exile, leaving Bahrain for Denmark, after she received threats of rearrest, following her release from prison at the end of May.

Human rights activists have also been blocked from travelling to Geneva. Five activists who tried to board a flight to Geneva this week were denied entry, and told that they had travel bans, placed into effect from 10 June. They are the largest group of people Bahrain has placed under travel ban at a single time. This is a clear restriction of civil society’s free movement, to prevent them from speaking at the UN Human Rights Council.

Reflecting the absence of political will for effective human rights reform, Bahrain Foreign Minister Khalid Al Khalifa responded to the High Commissioner’s statements with complete disregard: "We will not delay our journey and the policy of our reformist King. We will not allow the undermining of our security and stability and will not waste our time listening to the words of the High Commissioner who is powerless."

The High Commissioner's strong criticism follows up on his statement in March 2016's 31st Session of the UN Human Rights Council, when he called for "profound reform" in the country.