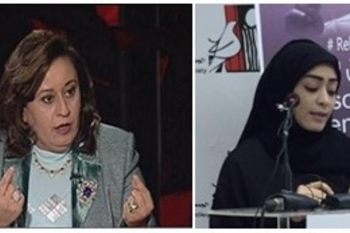 The Bahrain Center for Human Rights (BCHR) is deeply concerned about the recent repressive steps of the Bahraini government, particularly against women human rights defenders. We condemn in the strongest terms the actions undertaken by the authorities and call for reconciliation.

In its most recent attempt to impede and restrict the work of human rights defenders in Bahrain, the government of Bahrain imposed a travel ban on Enas Oun, head of BCHR’s Monitoring and Documentation Section. This morning, 22 August 2016, while on her way to a human rights workshop in Tunisia, she was stopped by Bahraini authorities at Bahrain International Airport. The authorities informed her that she cannot travel based on an order issued by the Criminal Investigation Department (CID) on the previous day, 21 August 2016. BCHR believes that by enforcing such bans, the government of Bahrain continues its attempts to impede human rights advocacy, clamp down on activists and restrict their movements.

Another woman human rights defender who was targeted by the authorities is Ghada Jamsheer, who is a writer, blogger and President of the Women’s Petition Committee (WPC), a network of female human rights defenders in Bahrain, campaigning for reform of Bahrain’s family laws. On 15 August 2016, Bahraini authorities arrested and detained Jamsheer upon her arrival to Bahrain International Airport from London. As of today, she has not been released nor allowed any direct contact with her family or lawyer. On 22 June 2016, a Bahraini court upheld a one-year sentence against Jamsheer over charges related to remarks she made on the social media website Twitter, regarding corruption by members of Bahrain’s ruling family in one of the government-run hospitals.

It is not the first time, that Jamsheer has been targeted by Bahraini authorities. She has been effectively banned from all national media and her online blog has been blocked in Bahrain since 2009. Jamsheer was previously arrested and detained in September 2014 for over three months for charges of defamation via Twitter in the same case. A few months later, in March 2015, the authorities imposed a travel ban on her, after she attempted to fly to France to receive medical treatment. In June 2015, Jamsheer, was also sentenced in the defamation case to one year and eight months in prison for tweeting about corruption at King Hamad hospital.

Other victims of the government’s crackdown on women human rights defenders is the journalist, human rights defender, and torture survivor Nazeeha Saeed. Saeed was banned from traveling in June 2016, The authorities summoned her for interrogation about her media work, accusing her of allegedly lacking the necessary governmental authorisation and was eventually fined the equivalent of USD$2,650.

Earlier this year, activist Zainab Al-Khawaja was arrested and detained together with her 15-months old son. Although she was released on 31 May 2016 on "humanitarian grounds" following international pressure, she was reportedly threatened with indefinite detention if she did not leave the country. She was eventually forced into exile in Denmark in June 2016. Zainab as well as her sister Maryam Al-Khawaja have been previously arrested and sentenced to jail terms by Bahraini authorities.

BCHR believes that the government of Bahrain is attempting to clamp down on human rights defenders and restrict their movements and means of advocacy. In recent months, this has resulted in extended media control and censorship, an increased amount of travel bans and revoked citizenships, as well as the accompanying repression and use of excessive force. Women defenders have been one of the main groups to be targeted by the authorities. Jamsheer, Oun, Al-Khawaja and Saeed are only a few women whom have been subjected to violations of their rights and freedoms. Currently, there are four women in detention over politically motivated charges, which are related to freedom of expression.

BCHR affirms that the measures and sentence against the aforementioned women human rights defenders is in direct violation of their right to freedom of expression and their right to free movement. Therefore BCHR calls upon the authorities to: