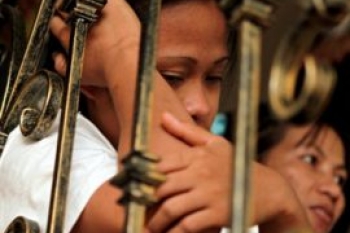 The Bahrain Center for Human Rights (BCHR) and Bahrain Interfaith condemn the government of Bahrain’s disregard for the growing abuse against female domestic workers in the Kingdom. We call on the governments of Bahrain and of labor-sending countries to ensure religious freedom rights are protected.

This report traces abuse and exploitation to which female domestic workers in Bahrain are subjected by employers, with regards to their rights of worship. The report outlines the rights and international legal standards that apply to workers.

Approximately 460,000 migrant workers, mostly from Asia, make up 77 percent of the country’s private workforce. Due to shortcomings in Bahrain’s legal and regulatory framework and the failure to implement and enforce existing laws, migrant workers, especially female domestic workers, endure serious abuses such as unpaid wages, passport confiscation, unsafe and unhealthy accommodation, excessive work hours, and physical and psychological abuse. They are also being subjected to deprivation of their rights to worship and the absence of religious freedoms.

Many human rights organizations have expressed concerns over the treatment of female domestic workers in Bahrain, confirming that housekeepers and domestic workers are systematically exposed to discriminatory, cruel, inhumane and degrading treatment. In a recent report on labor in the Gulf Countries, the number of female domestic workers in Bahrain was estimated to exceed 80,000. The increasing rate of their abuse has raised serious concerns over the absence of strict and well-established legislation and administrative measures that regulate the relationship between these  women and their employers.

Reports stated that the majority of these maids are practically treated as private property, looking more like a modern day slavery system, wherein the maids are deprived of their basic human rights. Many of these workers are not able to nor allowed to communicate with friends, family and other people besides residents of the house they serve in. Although they are physically and legally not detained or arrested, some of them are forced to live in a state of incommunicado. Many of them do not leave the house and are not allowed to step anywhere near the door.

Additionally, there is no proper legal framework that preserves the female domestic workers’ religious freedom rights including the right of worship and practicing religious rituals in line with the Articles of the International Covenant on Civil and Political Rights (ICCPR).

Female domestic workers are reportedly deprived not only of the freedom to worship their religion but also of portraying their religion or its symbols in any manner or way. Most maids are not allowed, and in reported cases severely punished, to even wear or put up religious symbols like a cross, even though there are no laws prohibiting employees from wearing or carrying religious symbols. BCHR and Bahrain Interfaith documented cases of female domestic workers being subjected to deprivation of their right to freedom of religion.

Despite fear of reprisals, domestic workers told stories of being prevented from practicing their religion. (Their full names are withheld in order to protect them from further abuse.)

Ruwaina (Philippines) told us: “We are three maids at the same house, and two of us are not allowed to wear the cross, because it is haram. We understand that, but the boss doesn’t allow us to go to church also.  One time he saw me pray and punished me……but [another maid] is Muslim, she is also not allowed to go to Mosque.”

Additionally, there are reports that female domestic workers and housekeepers, particularly Hindu, have been victimized and abused severely at a physical and mental level.

Roopa (India) stated: “My boss will not let me go to the temple, because he said that I am a pagan and worship stone.  I cannot live like this anymore!”

Julie (Philippines) said: “I told him, deduct from my salary if you want, but please send me to church, at least just for Christmas. He said, “You are Kafir (infidel), I will not help you commit wrong.  Even if you go to the Labor Ministry, or to the embassy, no one can do anything for you.”

Jojah (Indonesian) reported: “Not even once did my employer allow me to attend the prayers or sermons at the mosque, not even during Eid.  Even in the house, I am not given time to perform my daily prayers.  Only at night when the family goes to sleep, I perform my prayers too late.”

"Depriving tens of thousands of maids and domestic workers in Bahrain from their right to attend churches, temples, mosques and religious centers should be loudly denounced by human rights organizations in Bahrain and abroad," Sheikh Maytham Al Salman, the head of Interfaith Organization stated. "The government of Bahrain has miserably failed to protect the religious freedom of domestic workers and maids from abuses committed by state and non-state actors."

Bahrain has claimed that it is committed to improving migrant labor laws and practices; however, the implementation of laws are inconsistent with international labor law standards and the international human rights commitments of the government of Bahrain.

"These Asian migrants, due to not being able to find appropriate work in their country of residence, take up these jobs in Bahrain to ensure that they sustain their livelihood and that of their families. They left their countries, but they did not leave their religion and beliefs and Bahrain must ensure their protection and rights to worship," a local labor rights activists said.

Therefore, the Bahrain Center for Human Rights (BCHR) and Bahrain Interfaith call on the government of Bahrain to: