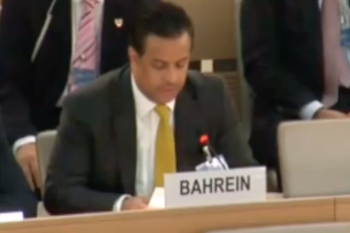 At the 33rd session of the United Nations Human Rights Council held in Geneva, the government representative from the Kingdom of Bahrain completely denied the serious deterioration of the human rights situation in the small island kingdom, when stating: “Our progress in the field of human rights continues.”

Responding to opening remarks by the UN High Commissioner for Human Rights, Zeid Ra’ad Al-Hussein,on 13 September 2016, in which he noted that “the past decade has demonstrated repeatedly, and with punishing clarity, how disastrous the outcomes can be when the government attempts to smash the voices of its people instead of serving them,” the Bahraini representative claimed that concerns about the harassment and arrests of human rights defenders and the revocation of citizenships were both “mistaken and inaccurate.”

While national human rights institutions have been set up in response to heavy international criticism of the authorities’ violent response to the peaceful, pro-democratic uprising in 2011, these institutions - in spite of the government’s claims to the contrary - have not delivered on promises to ensure accountability and redress for victims of human rights violations. According to the third annual report from the Office of the Ombudsman there have been no convictions in alleged cases of torture since the office began receiving complaints. The Government of Bahrain nevertheless insisted: “These activities and programs are productive – having encouraging results.”

It thus appears that the Government of Bahrain is in complete denial of the current state of affairs, something which became blatantly obvious when the Bahraini representative made the following remark:

“The Kingdom of Bahrain wholeheartedly agrees on the desirability of engaging productively with the High Commissioner’s Office. It has repeatedly demonstrated its willingness and readiness to do so.”

Yet, as documented in the report Charting the Seas of Abuse: Analysis of United Nations Special Procedure Communications to the Kingdom of Bahrain 2011 – 2016, the Government of Bahrain has accumulated since 2011 a total of seven outstanding visit requests by the UN Special Procedure mandate holders. Bahrain’s statement given today at the Human Rights Council therefore stands in stark contrast to its actions and seems to completely deny the basis for the numerous statements of concern about the continued, ongoing and deteriorating human rights situation in the Kingdom from the international community.

In the new report Collective Efforts: International Calls for Accountability and Reform in Bahrain, BCHR together with partner organizations conclude that it is time for the Human Rights Council to issue a resolution on Bahrain that not only reflects but insists on the increasing seriousness of the human rights situation in Bahrain. This must be done to send a clear message to the Government of Bahrain that the international community will not tolerate the continued violation of basic human rights in the Kingdom.

At the time of writing, all public figures of BCHR residing in Bahrain have been banned from leaving the country, including to attend the UNHRC33, and some are detained and/or being prosecuted for their peaceful human rights activities.

See below an unofficial transcript of the full text of the statement delivered by the representative of Bahrain at the 33rd Session of the United Nations Human Rights Council in Geneva on 14 September.

The Kingdom of Bahrain wholeheartedly agrees on the desirability of engaging productively with the high commissioner office. It has repeatedly demonstrated its willingness and readiness to do so. In fact, a detailed program of work has been agreed between us and the OHCHR under the current technical capacity-building program. Although one event took place in Bahrain in May 2016, our repeated request for further activities as agreed have not been met with positive response. We will look forward to the OHCHR’s prompt and positive engagement.

Our progress in the field of human rights continues. In addition to many domestic initiatives, Bahrain has a variety of bilateral, technical and capacity-building programs with different countries and partners, including reputed international organizations and NGOs. These activities and programs are productive – having encouraging results.

The High Commissioner’s concerns regarding Bahrain are mistaken and inaccurate. Every person under arrest in Bahrain has been charged with the violation of the penal court and the general criminal law of the land. In addition, Bahrain’s law of citizenship complies with the international laws applicable to the Kingdom.

The High Commissioner also made a general statement regarding the first decade. This surely does not apply to Bahrain. I remind this (...)  Council of the numerous unprecedented reforms in Bahrain since the adoption of the national action charter in 2006.

These reforms have been repeatedly affirmed in this Council in the past decade. In addition, finally Bahrain has responded to every communication received under the Special Procedures – this shows positive and constructive engagement across the Council, which will continue.