BCHR at HRC33: Council Should Pass a Resolution on Bahrain 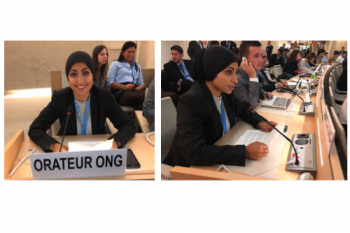 Please continue reading for full remarks or click here for the PDF. You can find a video of the intervention here.

In early 2011, the Government of Bahrain, with the support of Saudi Arabia and the UAE, violently suppressed the popular pro-democracy movement calling for human rights and democratic reforms. Five years later, many of the abuses of 2011 have been institutionalized by the Bahraini state.

Torture and arbitrary detention are widespread and systematic in Bahrain, where false confessions extracted under torture lead to arbitrary convictions by courts lacking any semblance of independence under international standards. Under Bahrain’s counter-terror law, freedoms of assembly and expression are vastly restricted, including blanket ban on protests in the capital, Manama, and all forms of dissenting expression are criminalized. As a result, Bahrain’s prisons are now home to almost 4,000 political prisoners, among them are almost all of Bahrain’s leading political opposition figures, activists and human rights defenders.

Those that they don’t imprison, Bahrain has chosen to denaturalize and expel from the country. The government has arbitrarily denaturalized over 300 Bahrainis, the majority of whom are human rights defenders, political opposition figures, journalists, academics and Shia religious leaders.

We therefore call on this Council to pass a resolution on Bahrain that insists that the government immediately release all prisoners of conscience and mandates independent investigations into past and present abuses to facilitate accountability.