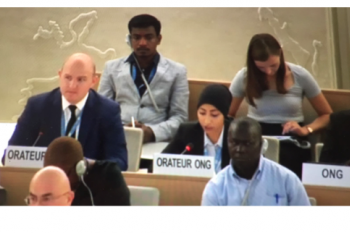 For the second consecutive session, the Government of Bahrain has used arbitrary travel bans to restrict Bahraini civil society from traveling to Geneva to participate in the Human Rights Council.

Given the restrictions faced by Bahraini civil society in June, a number of activists attempted to leave Bahrain in late August in anticipation of another round of travel bans related to this Council session. However, almost all of those facing travel bans in June found their these arbitrary restrictions refreshed in advance of the 33rd Session of the HRC. Again, delegations of human rights defenders from across Bahraini civil society have been banned from traveling, as well as members of the now-banned al-Wefaq political society.

Mr. President, we in the independent human rights community call on you and the members of this Council to publically and forcefully denounce these and other acts of reprisals against this Council. We must make clear to Bahrain and all states, that reprisals are wholly unacceptable and must never be tolerated.