BCHR at HRC33: On Sectarian Discrimination in Bahrain 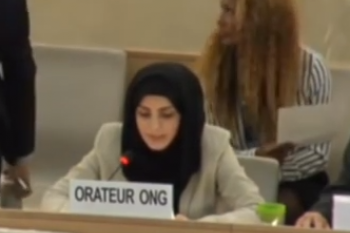 On 27 September, Asma Darwish, Advocacy Officer at Bahrain Center for Human RIghts, delivered an oral intervention on behalf of ADHRB at the 33rd session of the United Nations Human Rights Council in Geneva under item 9, together with the Alsalam Foundation, the Americans for Democracy and Human Rights in Bahrain (ADHRB) and the Bahrain Institute for Rights and Democracy (BIRD).

The DDPA recognizes “with deep concern religious intolerance against religious communities and their members.” It also “urges States to ensure… that persons belonging to … religious … minorities can exercise fully… all human rights and fundamental freedoms.”

Alsalam Foundation together with Americans for Democracy & Human Rights in Bahrain, the Bahrain Institute for Rights and Democracy and the Bahrain Center for Human Rights is concerned with the serious and growing threat of sectarian discrimination to stability in Bahrain. In both rhetoric and practice, hate speech places Shia communities in increasing danger of violence and discrimination.

Since 2011, the government and its supporters have used ethnoreligious hate speech to discredit political opposition and stoke societal division. Though sectarian incitement is criminalized, the government exclusively uses this legislation to target peaceful Shia dissenters. However, authorities have tolerated and even encouraged sectarian hate speech against the Shia, even citing this entire religious community as “terrorists” and “Iranian agents” in official media. There are also reports of them being described as “cockroaches…that must be put down.” A recent study revealed that the government and its supporters have created thousands of automated Twitter accounts to disseminate sectarian hate speech.

Government policies also reflect discrimination. It is estimated that Shia citizens account for less than 5% of all Bahraini security service personnel, despite representing as much as 70% of the citizen population.

We therefore call on the Government of Bahrain to stop the endorsement of sectarian hate speech against the Shia and to ensure the right of Shia and other religious and ethnic minorities to non-discrimination.