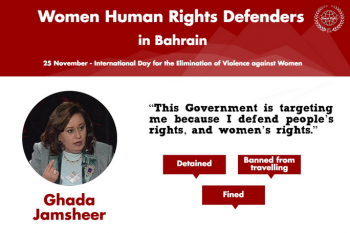 Marking the UN International Day for the Elimination of Violence against Women, the Bahrain Center for Human Rights (BCHR) expresses grave concerns over the continued targeting of women human rights defenders (WHRDs) in Bahrain. In the past few weeks, BCHR has noticed a rise in the number of women who have been summoned for interrogation over vague charges all relating to “illegal assembly”, jailed, or banned from leaving Bahrain. In line with BCHR’s WHRD campaign on twitter, we strictly condemn this pattern of targeting women human rights defenders.

On 15 November 2016, Nedal Al-Salman, Head of International Relations and Women and Children Advocacy at BCHR, was interrogated on charges of “illegal assembly,” after being summoned by the Public Prosecution. Additionally, Enas Oun, Head of BCHR’s Monitoring and Documentation Section, was summoned on 13 November 2016 and accused of organizing an assembly on 20 June 2016 in the Al-Dair area, around 11:45 pm. Both have been subsequently released. It is not the first time that Nedal Al-Salman and Enas Oun have been targeted for their human rights work. On 29 August 2016, when Al-Salman was about to travel to Geneva to participate in the United Nations Human Rights Council’s 33rd session, the authorities at the airport informed her that she was not allowed to leave the country. The decision was based on an order by the public prosecution. On 22 August 2016, Enas Oun was also stopped by the authorities at Bahrain’s international airport when she was intending to travel to Tunisia to participate in a human rights workshop. The authorities informed her that the decision was also based on an order issued by the Criminal Investigations Directorate (CID).

Ghada Jamsheer, blogger, writer and President of the Women’s Petition Committee (WPC) - a network of women’s rights defenders that campaign for a reform of family laws in Bahrain, was also targeted by the authorities. She was detained and arrested upon arrival at Bahrain International Airport on 15 August 2016. On 22 June 2016, a ten-month combined prison sentence was upheld against her for charges relating to criticism she allegedly made on Twitter regarding corruption at King Hamad hospital Up to this day, she is still detained at the Isa Town Detention Center for Women, known for ill-treatment and poor health conditions.

In April 2016, Taiba Darwish, a Bahraini citizen, was convicted and sentenced to five years in prison over charges of “harbouring wanted suspects.” According to the European-Bahraini Organization for Human Rights (EBOHR), Darwish was subjected to ill-treatment while being detained. She was also forbidden from having contact with her family and the outside world for prolonged periods.

The Bahraini government’s attempts to shatter women’s voices are not new. During the 2011 uprising period, many Bahraini women activists exposed human rights violations via Twitter, blogs and other social media platforms. The authorities tried to silence activists through the use of detention, arrests and sometimes, imprisonment. Since 2011, BCHR has documented the arrest of more than 300 women. Some women, such as prominent journalist Nazeeha Saeed, have been subjected to torture while in prison. Zainab Al-Khawaja and Maryam Al-Khawaja, daughters of jailed human rights defender Abdulhadi Al-Khawaja, were both targeted by the bahraini authorities for engaging in human right activism. Zainab Al-Khawaja was sentenced to two years and four months in jail, and fined 3000 Bahraini dinars (USD$ 7900) for tearing up a photo of the king, an offense made criminal by article 214 of the 1976 Penal Code. She was released on humanitarian grounds. Both sisters now live in exile in Denmark.

In the past years, BCHR has monitored the process in which the right to freely exercise freedom of expression has been criminalized. Most arrests were motivated by comments made on Twitter, or through other social media platforms, and materialized into charges of “insulting the king,” “inciting hatred against the regime,” or “insulting the Ministry of Interior.”

By arresting women for engaging in human rights activism, the Bahraini government also breaches Article 19 of the International Covenant on Civil and Political Rights (ICCPR), which guarantees the right to freedom of expression on any platform “every individual has the right to freedom of expression. This right shall include freedom to seek, receive and impart information and ideas of all kinds, regardless of the frontiers, either orally, in writing or in print, in the form of art or through any other media of his choice.”

The Bahrain Center for Human Rights calls on the Bahraini government to: