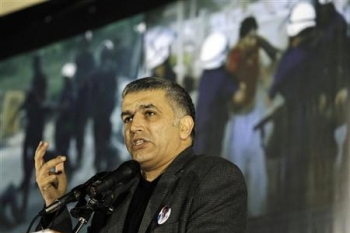 Lawyer’s memorandum in the defense of Nabeel Rajab (Unofficial translation from Arabic):

The Ministry of the Interior (MOI)’s expert [from the Criminal Investigation Directorate] claimed that the registration of the mentioned Twitter account (@NabeelRajab) is linked to two email addresses, through which the account is accessed and managed. These two are na***********@gmail.com as well as na ********* *@bahrainrights.org, and through confidential sources it concluded that these addresses are nabeel.rajab@bahrainraights.org and nabeel.rajab7@gmail.com, which belong to Nabeel Rajab. This opinion is incorrect and is not reliable as the expert had built his conclusion on the assumption that the missing e-mail letters referred to first letters of the name of Nabeel Rajab (“na”), and this claim is not true at all and is denied by the accused, where the technical expert should not build conclusions on his suspicions.

This negates the conclusion reached by the expert, which confirms what we stated in regard to his non-neutrality, even more. As the expert claims that his source to identify the alleged e-mail address are confidential sources, this leads us to question whether the court has summoned the expert to provide technical opinion built on technical grounds, or to act as a secret informant and detective?

And if the conclusion of the expert with respect to the element of the e-mail address is a mere unfounded conjecture, we wonder why did the expert ignore the other element of the alleged data that he used as a basis to conclude that the defendant is the owner of the Twitter account in question. The other element is the phone number which was mentioned in the expert's report. Also he claimed that on Wikipedia, “the largest encyclopedia on the Internet,” it’s explicitly stated in the page for “Nabeel Rajab" that the Twitter account in question is his account and a link to that account was included. Additionally, the expert has deduced the relation between the defendant and the Twitter account through his own search over the Internet as he referred to the Wikipedia page of “Nabeel Rajab”.

The expert is trying to mislead the judiciary by claiming that Wikipedia is the “largest encyclopedia in the Internet” while it is merely a free site of information; to be more clear it is the site which everyone can browse it and its information is written by its visitors and surfers and that the information contained in it is not reliable as it reflects the opinion of the authors who post on the website.

The expert went as far as he could to connect the Twitter account to the defendant relying on unfounded reference. And he has ignored the tweets from the Ministry of the Interior (which were released after the arrest of the accused) which confirms that the account in question is not managed by the accused, as stated in the tweet by the Interior Ministry that was published in Arabic and English. The question here is: Why didn’t the expert refer to this tweet and its meaning? Because it leads to denying the charge, but the expert was sent on an errand for the purpose of proving the charge and not telling the truth.

Therefore, we are calling for the invalidity of the expert's report; due to lack of neutrality and impartiality of the commissioned expert in his performance of the task assigned to him, as the expert’s report is flawed with lack of neutrality and impartiality. And because the expert tried to force the connection of the charge haphazardly to the defendant, as was already touched upon previously in our defense, where the important fact cannot be overlooked that the expert is an employee (military personnel) in the Ministry of Interior, at the Criminal Iinvestigation Directorate (CID), which is the same directorate that filed the criminal communiqué against the accused. Therefore it is not surprising that the expert's report is weak in its basis and conclusion, as he attempts to fabricate the charge and tie it to the accused falsely.

The lawyers argued during the court session on 15 December 2016 that the conclusion of the expert's report contradicts the firm extracts obtained from all the devices linked to the accused as documented in the case file, and which have been examined by order of the public prosecutor, and proved clearly and with certainty that there is no connection between the defendant and the subject of the charge altogether, as was already presented in the memorandum of the case.

According to the lawyer, the expert has failed to mention even one piece of technical evidence to prove the relation of the accused to the alleged account. Instead, the entire set of documents have lacked any evidence or a sign of one, but on the contrary the case papers pronounce the innocence of the accused. The lack of relevance is clear since all the extracts in the hands of the court prove the lack of evidence relating to the subject of the indictment, where there is no connection, nor contained in all the seized devices and the indictment of the accused.

The lawyers said that the best example of the invalidity of the result of the report is its contradiction to the official statement of the Ministry of Interior, published on 5 August 2013 at its official account and in which it confirmed: “About tweets through accounts of inmates Nabeel Rajab & Abdulhadi Al Khawaja. Those 2accounts are run by individuals from outside the prison”. And it proves to the court and with testimony of the Interior Ministry that the accused is not related to the management of the account altogether.

The lawyers demanded: Primarily: Acquittal of the accused of the charge assigned to him, due to the lack of connection with the subject and absence of evidence on the case documents; and Secondarily: Approach the Twitter company and ask for a statement to show if the accused had personally verified a personal account for him on their site, and to assign an independent technical specialist expert from outside the Kingdom of Bahrain, to provide a technical report about the incident subject of the charge. Thirdly: Call the head of the General Security to listen to his statement and his testimony in regards to the Ministry of the Interior’s official statement published in the media about the account labeled “Nabeel Rajab”. Finally: Call the technical expert who was assigned by the court for cross-examination by the defense team about his report.

Judge Ebrahim AlZayed decided to call on the prosecution witness and the technical expert for testimony at the court on 28 December. He refused to allow Nabeel Rajab to talk during the session.