Bahrain bars civil society from participating in the UPR review 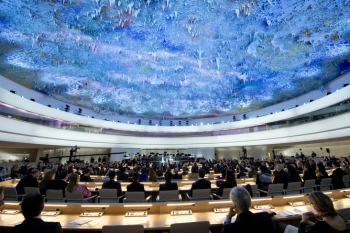 Bahrain Center for Human Rights (BCHR) is highly concerned about the recent move by the Bahraini authorities to block the engagement of civil society in the UN Universal Periodic Review (UPR). Between 20 and 26 April, 19 Bahraini activists and human rights defenders have received summons (1 calling them for interrogation and all of them have been charged for illegal gathering and travel banned following their interrogations, including 4 BCHR members (2.

“Bahrain should allow the free participation of civil society in the UPR Process without fear of reprisal or intimidation” said Said Yousif Almuhafdah, Vice president “BCHR is particularly concerned about the judicial harassment of our colleagues inside Bahrain, like our Head of Advocacy Nedal Al-Salman who has just been  interrogated today by the Public Prosecution”.

In a continued judicial crackdown, the Bahraini government has issued over 37 summons calling activists, opposition members, journalists, and human rights defenders to interrogation. Amongst them, 17 activists and 2 human rights lawyers, including 4 of BCHR’s staff members. They have been all accused of illegal gathering in Duraz, although Duraz is under siege, meaning that no one is allowed to enter without passing through security and ID check.

The interrogations take place ahead of Bahrain’s UPR which starts on the 1st of May. The UPR is an unique opportunity for UN member States to show what steps they have taken to promote human rights. The UPR occurs every four years, and Bahrain last participated in 2012 when it committed to implementing most of the UN’s recommendations, including on protecting civil society space.

BCHR therefore calls on the Human Rights Council and its Member States to highlight the severe restrictions on human rights defenders in Bahrain, including the reprisals for engaging with UN mechanisms, in their UPR remarks and recommendations.

This new wave of travel bans and interrogations are symptomatic of a broader strategy to intimidate and harass human right defenders in Bahrain and should be urgently addressed by the Human Rights Council.