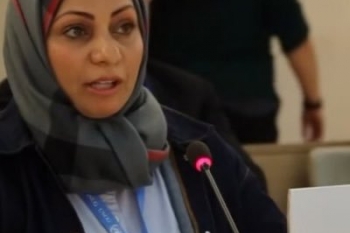 On 3 July at approximately 11:45 PM Bahraini security forces raided the home of prominent WHRD  Ebtisam Al-Saegh and arrested her. Ebtisam Al-Saegh is currently affiliated to SALAM for Democracy and Human Rights (SALAM DHR) and is well-known for her cooperation with the United Nations mechanisms in exposing human rights violations in the Kingdom of Bahrain.

According to reports from the ground, the Bahraini security forces descended on her house from five civilian cars and a bus. Her family received no explanations as to the reasons behind her arrest, nor have they heard from Ebtisam Al-Saegh on her current whereabouts since then. She is believed to have been detained in Isa Town women’s prison and transferred by the Bahraini National Security Agency (NSA) in an unknown location in the morning of July 4. She is at high risk of torture and sexual violence due to her human rights work. Inmates from Isa prison who are normally allowed out of their cells in the morning have not been allowed to today, allegedly because of Ebtisam Al-Saegh’s presence in the prison and torture and ill-treatment she might be facing.

This is the second time that Ebtisam Al-Saegh is arrested this year. On 26 May, Ebtisam Al-Saegh was summoned by the Bahraini National Security Agency (NSA) to be interrogated in Muharraq. She later revealed that during her seven-hour interrogation, she was sexually and physically abused by her interrogators, beaten all over her body, kicked in the head and stomach. They subjected her to verbal abuse, groping of breasts and rape. The interrogators also threatened her with the safety of her husband and children if she did not quit her human rights activism and her association with the SALAM organization.

During the interrogation, she was asked to disclose information about other Bahraini human rights activists, both in Bahrain and abroad; additionally, she was interrogated on her participation at the UN Human Rights Council 34th session in March 2017. Following the interrogation, Al-Saegh was immediately hospitalized in a state of shock.

Bahrain has a long record of stifling dissent by targeting activists, such as harassments, beatings, arbitrary arrest, ill-treatment and torture in detention, unlawful detentions and intrusive surveillance.

While these patterns of repression are well documented, little attention has been paid to the toll of this repression on women activists. Women involved in advocacy campaigns or public event at the UN such as Ebtisam Al-Saegh have been particularly targeted and face an array of abusive practices their male colleagues are less likely to have to contend with – from sexual violence to imposing humiliating positions or questioning during interrogations. Ebtisam Al-Saegh, in addition to being blindfolded as her male colleagues, reported that the officers held her legs open during most of her interrogation and sexually abused her.

According to a recent investigation by BCHR submitted to the CAT, sexual violence and sexual harassment are routinely being used to torture women into confessing to crimes in Bahrain.

As you highlighted in a joint statement,  when women like Ebtisam Al-Saegh are tortured or ill-treated, they are specifically at risk of forms of violence that target them because of their gender.

We respectfully urge you to issue an urgent and public communication to the Bahraini authorities concerning the particular risk faced by Ebtisam Al-Saegh to be subjected to further torture and sexual abuses.  It will greatly help raising her profile of women rights defender, calling attention to the particular risk she faces, and ensuring she receives appropriate remedies.