Bahrain to continue persecution and imprisonment of Nabeel Rajab : trial delayed for 17 time 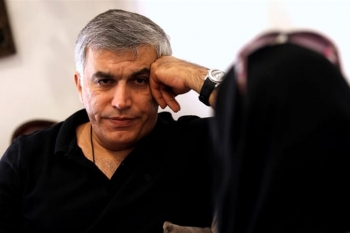 September 11, 2017: “The Bahraini authorities must end their persecution of prominent activist Nabeel Rajab and immediately and unconditionally release him, said BCHR today. “Our president is merely being punished for refusing to stop his legitimate campaigns for justice in Bahrain and for criticizing the Saudi Arabia-led military operations in Yemen.”

Nabeel Rajab has been convicted in July 2017 for two years after an unfair trial which was deeply flawed and was widely criticized by various human rights bodies and international human rights organisations. This second case brought againt him is related to Twitter comments published on his twitter acount between March 10, 2015, and his arrest on April 2, including nine Anti-War tweets about the military operations in Yemen.

The today hearing was again adjourned until  September 27, despite the prosecution failed to bring any evidence to court since 2015.