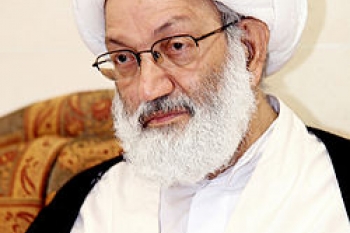 The Bahrain Center for Human Rights (BCHR) expresses grave concern of the health state of Ayatollah Isa Qasim, which has, recently, seriously deteriorated. He is still being held under house arrest despite his need of immediate medical attention. His family was kept waiting for over four hours at the police station before a doctor was allowed to access the Duraz area where he lives, an area that has been surrounded by police and under siege for over a year. This has further aggravated his health state.

According to his family: Ayatollah Isa Qassim is suffering from an aggravated case of abdominal hernia which is causing him severe pain, esophagus bleeding for over two months which cause has not yet been diagnosed and extreme fatigue; his ability of movement has been highly reduced.

Moreover, Ayatollah Isa Qasim already suffers from several chronic diseases such as high blood pressure and diabetes. He has not been able to receive efficient medical care for almost a year and a half because he has been stripped of his nationality. Since 2011, non citizens in Bahrain or citizens with no ID card cannot seek medical care and will be reported to the Ministry of Interior (MOI).

On Sunday 26th of November, a doctor visited him and confirmed that he has to undergo an urgent procedure for his hernia, which, at his age, is highly risky.

After the authorities stripped him of his citizenship in June over allegations of extremism and money laundering, he could be deported at any time. Due to the way the Bahraini government has dealt with the false accusations, Sheikh Isa Qasim has been insisting that he only receives medical treatment from a surgeon and medical group he trusts.

Furthermore, there is no longer a valid reason for the ongoing house arrest as the peaceful assembly outside his house has ceased.

Due to Ayatollah Isa Qasim’s critical condition, BCHR calls on the government of Bahrain: