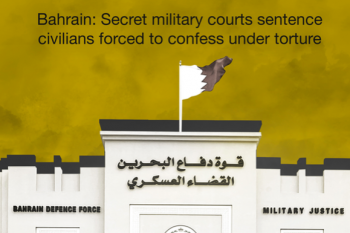 The general principles of the Comparative International Law and the International Bill on the judiciary and trials warn of trying civilians in military courts or extending the application of special judicial laws in extraordinary cases.

It is well known and recognized that military courts are those which handle offenses committed by military personnel and associated with their military functions, and this is how the military court was described in the 2002 Constitution of the Kingdom of Bahrain, and particularly in section b of Article 105 thereof, which stipulates that,

“The jurisdiction of military courts shall be confined to military offences committed by members of the Defense Force, the National Guard, and the Security Forces. It does not extend to other persons except when martial law is declared and within the bounds prescribed by law.”

However, after the report of the Bahrain Independent Commission of Inquiry (BICI) was issued – especially paragraph 119, which led to consequent legal effects 5 nullifying the sentences of military courts during the period of the declaration of martial law that was accompanied by human rights violations, and then repeating the trials in civil courts – Bahrain resorted to surpassing this constitutional prohibition by amending Article 105 of the Constitution on March 30, 2017, lifting the constitutional impediment of trying civilians in military courts.

This constitutional amendment resulted in an amendment to the Military Judiciary Law on April 18, 2017, i.e. after less than twenty days and on an expedited basis. This law expands to make the military judiciary specialized in prosecuting civilians accused in the political cases stated in the Bahraini Penal Code (general law).