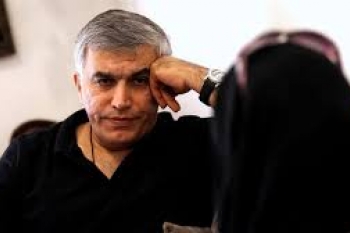 Court Rejects his Appeal Despite ill-treatment in prison
On January 15, 2018, in an appeals hearing that lasted only about ten minutes, a Bahraini Court rejected Nabeel Rajab’s appeal of a 2-year prison sentence for “spreading fake news that undermine the prestige of the state”,  and postponed once again his case for tweeting against the Saudi-led coalition war in Yemen to February 21, 2018.
Bahrain routinely misuses the courts, which lack independence, to target members of the political opposition and civil society activists. Rajab's verdict comes a few weeks after Bahraini Courts also upheld life sentences for 6 people and strip 26 of their nationalities on three consecutive days.
“We are very worried about Nabeel's safety and well-being," said BCHR today "Authorities should release him immediately, drop the charges against him, and investigate thoroughly his possible ill-treatment in detention."
On arrival at the prison where he is currently detained, Nabeel Rajab’s hair was forcefully shaved, he was subjected to an invasive body search and his books and clothes were confiscated. He is still held in the same cell than convicted high-profile ISIS terrorists.
The ruling means that Nabeel Rajab will now have to serve the remaining 11 months of a two-year prison term, for interviews he gave in 2015 and 2016 and for exercizing his right to freedom of expression.