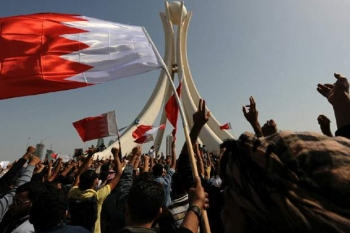 Yesterday, while Bahrainis were commemorating the uprising anniversary, security forces, once again resort to force to break up peaceful marches using tear gas and live ammunition and leaving several casualties among the protestors. As the international community looks away, the Kingdom has been aggressively pursuing his intimidation campaign and intensified the repression. This breakdown has reflected in the increase of Human Rights violations witnessed in the last months and the continued stifling of Human rights movements.

The arsenal of abusive practices deployed by the Bahraini authorities includes arbitrary arrests, house raids, unfair trials, suppression of peaceful protests, restriction of freedom of expression and movement, ill-treatment and torture. Among those recurrent patterns of repressions, certain particularly alarming trends have been observed in the last year, with a systematic use of repressive laws and legal procedures to punish dissent.

The year 2017 has witnessed an unprecedented proportion of resort to capital punishment by Bahraini criminal courts. This dramatic increase comes after eight uninterrupted years of absence of death penalty sentences. On 25 December 2017, a Bahraini military court sentenced six men to death on charges of forming a terrorist cell and plotting to assassinate a military official. Throughout the year, the instrumentalization of Terrorism Law has proven to be systematic and a large-scale technique used by Bahraini criminal courts to counter dissidents. To this day, three men have been executed on alleged terrorism charges and 22 remain on death row.

The Bahraini authorities are targeting Human Rights defenders’ actions within and without the country. Other than the persecutions that the Human rights activists are facing in Bahrain, the authorities are increasingly resorting to travel ban. Among the persons confronted to such a ban is Nedal Al Salman, BCHR Head of international advocacy. On December 2017, Bahraini customs prevented her from travelling to Brussels where she was invited by European Union to participate to NGO Forum on Human Rights. Another illustration of the extraterritorial range of Human Rights disregard by the Bahraini authorities is the prosecution close relatives of activists that fled the country.

Numerous abysmal practices employed by the Bahraini courts fall within the frame of the violation of the rights to a fair trial. Besides the groundless allegations and abusive convictions, one other intimidation means used has been the repeated cancellation and postponements of hearings for trials. Thus, Nabeel Rajab, leading voice in the Human Rights movement and President of the Bahrain Center for Human Rights, has spent more than one year in pre-trial detention awaiting his trial. In a separate case, where he faces up to 15 years imprisonment for tweeting, he is still awaiting his final hearing as it has been postponed 20 times.