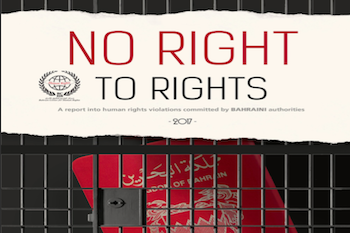 The most recent constitution of Bahrain defines it as a constitutional monarchy. The King is responsible for appointing the Prime Minister – the current incumbent has been in the position since 1971. Citizens of Bahrain have no power to change the Prime Minister. The King also has power to appoint government ministers and 50% of the National Council, as well as the country’s judiciary. This situation led the people of Bahrain to take direct action in 2011, organizing a large sit-in around the Pearl Roundabout, with the aim of strengthening their rights. However, authorities used excessive force to end the sit-in, leading to several deaths and significant numbers of injuries. Since that time, and up until the point of writing, authorities have continued to violate the human rights of Bahraini citizens.

Over the course of 2017 (between January and December, to be precise), the number of politically-motivated detentions increased, as did reports of torture and ill treatment carried out in order to force confessions during interrogations. Moreover, political and social media activists continued to be targeted, both by the security forces and by the judiciary. Human rights defenders have also been targeted. Politically-motivated court cases were pursued in a manner falling far short of the minimum basic standards for fair trials as stipulated by international law. This is not to mention the fact that civilians have been tried in military courts.

Authorities have also employed anti-terror laws against opposition activists and peaceful protesters. The UN and a host of other international organizations have called for these laws to be revised, since their broad-based and vague clauses violate standards of human rights and fair trial. There have been widespread restrictions on civil, religious and political freedoms, and violations on the right to privacy. What’s more, a number of opposition activists and Shia religious clerics have had their citizenship revoked, with several subsequently being deported.

The report that follows is a summary of the human rights violations documented by the Bahrain Center for Human Rights over the course of 2017. A number of other violations were reported, but it has not been possible to verify them due to fear on the part of victims, who have been unwilling to share their testimonies. The volume of violations reported during 2017 also meant that it was beyond the capacity of the Bahrain Center for Human Rights to investigate all of them.