Political speech is not a crime: Urgent appeal to stop the trial of opposition society leader Sheikh Ali Salman 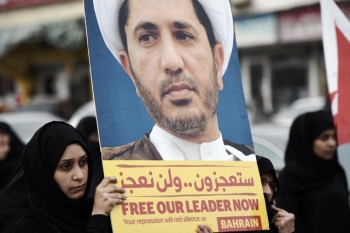 We the undersigned call on Bahraini authorities to drop all charges and ensure the immediate and unconditional release of Sheikh Ali Salman, Secretary-General of Bahrain's largest political opposition society, al-Wefaq National Islamic Society, who has been serving a four-year prison sentence for charges in response to political speeches he delivered in 2014, and who is now facing a potential death sentence in a groundless new trial on politically motivated charges.

However, despite the growing concern over the silencing of Sheikh Ali Salman and the subsequent 2017 dissolution of the political opposition society al-Wefaq, Bahraini authorities announced on 27 November 2017 the start of a new trial against him on charges of spying for Qatar.

The latest trial against Sheikh Ali Salman reinforces the closing of democratic space in the country; as the 2018 elections for Bahrain's lower house of parliament approach, the government has forcibly dissolved Wa'ad, the largest secular leftist society, and indefinitely suspended Bahrain's only independent newspaper Al-Wasat, in addition to upholding its arbitrary decision in 2017 to dissolve the political opposition society al-Wefaq.

NGOs have decried this use of the judiciary to punish opposition activists for publicly expressing views that oppose the Bahraini government. The trial is in violation of Sheikh Ali Salman's rights to liberty, fair trial, free expression, and free association.

We, the undersigned, call on Bahraini authorities to:
1. Drop all charges and ensure the immediate and unconditional release of Sheikh Ali Salman and the cancellation of the sentence issued against him in the previous case;
2. Stop prosecution of political dissidents and human rights activists for reasons related to freedom of expression;
3. Stop the arbitrary use of domestic legislation, including some articles of the Penal Code and the Law on the Protection of Society from Terrorist Acts, to criminalize the peaceful practice of freedom of opinion and expression;
4. Release all detainees who have been arrested for reasons related to exercising their fundamental rights to expression, organisation and peaceful assembly guaranteed by international laws.