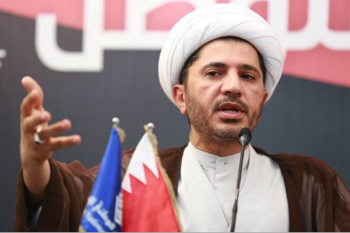 The Bahrain Center for Human Rights issued a statement welcoming  that the Secretary-General of Bahrain's Al-Wefaq sheikh Ali Salman was acquitted  (but still has years ahead in prison for various other  charges)with fear of an appeal for a trial that lacked the basic principles of justice and the failed to guarantee the independence of the judiciary system.

Sheikh MaythamAl  Salman advisor of the Bahrain Center for Human Rights (BCHR) confirmed that the trial was groundless and comes in the context of the PA's attempts to quell voices calling for political reforms, dialogue and national reconciliation.

The Bahrain Center for Human Rights issued a statement stating that the trial lacked principles of justice and failed to guarantee the independence of the judiciary.

The proceedings revealed numerous violations of the right of defense and non-response to lawyers' requests.

"The center said": that this trial was clearly based on a telephone that was tampered with, as revealed by technical reports of criminal justice professionals, and that the telephone call was in response to a US/Gulf mediation attempt to begin dialogue and reconciliation in 2011.

The Bahrain Center for Human Rights (BCHR) stated that Salman was a positive in corresponding  to a proposed initiative by the US administration mentioned in the memoirs of Hillary Clinton and in the report of the Bahrain Independent Commission of Inquiry.