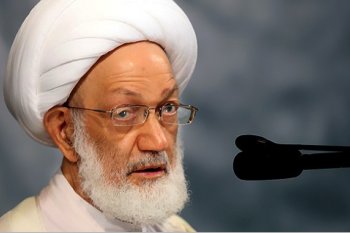 Various sources have confirmed to Bahrain Center for Human Rights that Sheikh Isa Qassim was transferred to the hospital at 9:35 pm Bahrain time after being delayed for Several hours.

Sheikh Isa Qasim has been under house arrest for almost 400 days and denied the right to medical care without  the governments permission. His hospital visits are usually under strict security measures.

Sheikh Qassim was transferred to the hospital after the deterioration  of his health status. While the reasons for his health deterioration have not been revealed yet, he has lost his ability to move and walk recently due to and the problem severe pain in his hips and pelvic area, according to the initial diagnosis.

The residents living close to his house have also confirmed the arrest of his son and son-in law by security officers during  accompanying Sheikh Isa in the ambulance cars . They are still being held at the police station.