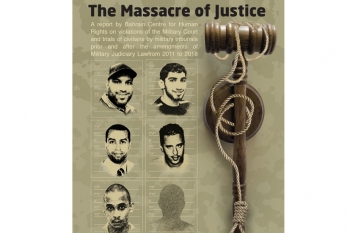 The Bahrain Center for Human Rights issued a new report entitled "Death Courts". The report was issued in Arabic and English to highlight violations of military justice and to try civilians before and after the amendment of the Military Justice Act.

In its report, which coincides with the International Day against the Death Penalty, the Center studies Bahrain's laws, which are a guarantee that the military judiciary does not have the jurisdiction to try civilians. And then explains the amendments to these laws in 2017, which gave these courts the powers to try civilians, after the King submitted a proposal for constitutional amendment to allow such trials under the pretext of combating terrorism. The report also documents the trial of civilians before military courts as well as monitoring and revealing facts about their sessions.

The report concluded with recommendations to the Government of Bahrain urging them to repeal the constitutional amendment and the Military Justice Act, and also calling them to accede to the Second Optional Protocol to the International Covenant on Civil and Political Rights on the abolition of the death penalty. In addition, the center made recommendations to the international community to confront the death penalty and to review the situation of courts in Bahrain.