Bahrain Center for Human Rights: Death penalty is a nightmare for Bahraini society 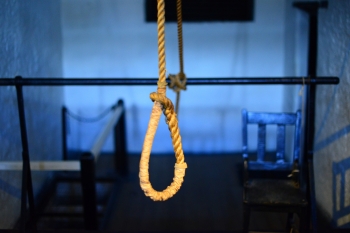 The Bahrain Center for Human Rights (BCHR) issued a statement today, October 10, on the occasion of the World Day against the Death Penalty. On this occasion, BCHR reiterated its request to the Government of Bahrain to sign and accede to the Second Optional Protocol to the International Covenant on Civil and Political Rights on the abolition of the death penalty.

The Center pointed out that "the death sentences have increased in recent years in the courts of Bahrain, especially in cases related to freedom of  opinion and expression in the exercise of political rights. The number of sentenced 22 people, four of them are sentenced to a final verdict and four others were commuted to life sentences. Real fears of the implementation of these provisions, as happened in early 2017, as the government of Bahrain carried out the death penalty against three civilians did not have a fair trial.

"While 137 countries tend to abolish the death penalty, the government of Bahrain is expanding the scope of the legislation and issuing death sentences, and the Bahraini laws and legislation are full of articles that contain the death penalty either in the Penal Code or the Protection of Society from Acts of Terror Law, as the number of articles and items in these laws to more than 83 articles and a sentence of capital punishment.

The Bahrain Center for Human Rights concluded its call for the international community, including the High Commissioner for Human Rights, to urge the government of Bahrain to freeze the death trials, and to join the countries that have abolished them.