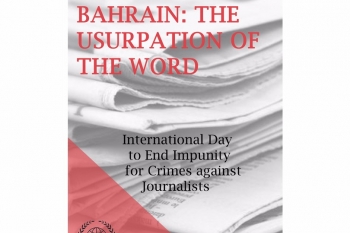 The Bahrain Center for Human Rights issued a new report entitled "Press in Bahrain: The Usurpation of the Word". The report was published in Arabic and English to highlight the reality of the Bahraini press, documenting the violations committed against journalists and those working in this field.

In its report, the Center examines Bahrain's laws and legislation restricting the freedom of press work and shows the extent of its non-conformity with the international treaties, covenants and agreements. The report also documents violations of media workers since the popular protests beginning in 2011.

The report concluded with recommendations to the Government of Bahrain urging them to the immediate and unconditioned release to all journalists, detainees and conscience who have been detained for expressing their views or for their work in the field of journalism and information. The report has also recommended canceling laws that do not match the International Covenant on Civil and Political Rights in the Bahraini Penal Code and Decree-Law No. 47 of 2002, which limits freedom of expression and freedom of the press.