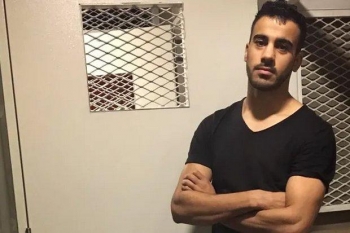 The Bahrain Center for Human Rights (BCHR) is gravely concerned about the case of Mr. Hakeem Ali Mohamed Ali AlAraibi, a Bahrain-born individual who has since fled Bahrain and now lives as a refugee in Australia. During recent travel, he was detained in Bangkok, Thailand, upon his arrival there on Tuesday 27 November 2018. He had previously been sentenced to ten years in prison in an unfair trial in Bahrain back in 2014 before he fled to Australia, where he has since been recognized as a refugee in 2017. He was informed upon his arrival in Bangkok on Tuesday that he would be handed down to Bahrain, where he almost certainly faces imprisonment and torture.

Mr. AlAraibi used to be a football player on Bahrain’s national team before he was arrested and tortured in November 2012. He has since publicly spoken about the harsh torture he was subjected to; he was particularly outspoken to the New York Times about Sheikh Salman bin Ebrahim al-Khalifa’s role in targeting out and torturing football players who participated in demonstrations. Mr. AlAraibi believed that he was partially targeted because of his Shia faith and the fact that his brother was politically active in Bahrain.

On 05 January 2014, Mr. AlAraibi was sentenced to 10 years imprisonment in absentia, while he was in Qatar on the charge of vandalizing a police station. Mr. AlAraibi claims that he was playing a match that was shown live on TV when the alleged crime occurred, but when his family reached out to the Bahraini soccer association to confirm his alibi, these requests went unanswered.

On 27 November 2018, Mr. AlAraibi travelled from Melbourne to Bangkok. Upon his arrival to Bangkok Suvarnabhumi Airport (BKK), he was detained and was informed that the reason for his detention was in conformity with an INTERPOL Red Notice against him, issued upon request of Bahrain on the basis of the criminal conviction against him in 2014. He was also informed that he would be handed down to Bahrain as soon as the immigration authorities could provide assistance.

The Australian embassy in Bangkok advised AlAraibi on 30 November 2018 that his case is cleared with the Thai authorities and that he should book the first flight back to Australia. However, Thai immigration authorities refused to hand him his travel document and insisted for him to book a flight the following night. A few hours before his pre-booked flight to Melbourne, Thai immigration authorities transferred AlAraibi to Suan Plu Immigration Detention Centre in Bangkok, where he is now detained. Thai authorities advised AlAraibi that the case is now between the Australian and the Bahraini Governments, and that the decision is theirs.

INTERPOL had lifted the Red Notice against AlAraibi on 04 December 2018. However Thai authorities continued to detain him following a court order issued on 03 December 2018 to detain AlAraibi for 12 more days.

Head of Thailand’s immigration Police Lieutenant General Surachet Hakparn said, in an interview with BBC Thai on 05 December 2018: "The Bahraini Government knew that he (Hakeem AlAraibi) would be arriving in Thailand (on the 27th of November), so they coordinated with Thailand's permanent secretary of foreign affairs to detain him, pending documents sent from Bahrain."

The Red Notice against Mr. AlAraibi may be inconsistent with the INTERPOL Executive Committee’s formal policy with respect to refugees of June 2014. Further, the maintenance of a Red Notice against Mr. AlAraibi is also likely in violation of INTERPOL’s own regulations. INTERPOL states, in its Constitution, that the organization will operate “in the spirit of the Universal Declaration of Human Rights.” The UDHR provides for the right to life, liberty and security of person, the prohibition of torture, the prohibition of arbitrary arrest, detention, or exile, the right to a fair trial, the right to a presumption of innocence, and the right to freedom of movement, among others. The Bahraini government’s conviction of AlAraibi is in violation of these principles. As such, the Red Notice associated with his conviction is in violation of INTERPOL’s own regulations, and should be disregarded.

Further, under international law, it is prohibited to return (“refouler”) an individual to a state or territory when there is a reasonable fear that the individual will be subjected to torture. This is explicit in the Convention Against Torture, implicit in the general prohibition against torture in both the CAT and the Universal Declaration of Human Rights and is generally considered a non-derogable and mandatory human rights jus cogens norm. In this case, there are reasonable and substantial grounds to assume that Mr. AlAraibi would be subjected to torture if he was returned to Bahrain, considering that he was previously subjected to torture in 2012 and that he has publicly named a high-ranking official and member of the royal family as having knowledge of his torture.

In May 2017, the United Nations Committee Against Torture has addressed the issue of widespread torture in Bahrain. In the Observations, the Committee stated that it was “concerned that there continue to be numerous and consistent allegations of widespread torture and ill-treatment of persons who are deprived of their liberty in all places of detention . . . at the moment of arrest, during pretrial detention and in prisons, in order to extract confessions or as punishment.” The Committee also noted that a “climate of impunity” exists in Bahrain in regards to torture, considering the low number of convictions for torture.

Based on the well-documented pattern of torture in Bahrain, BCHR call on the international organizations to put pressure on the Thai government to: