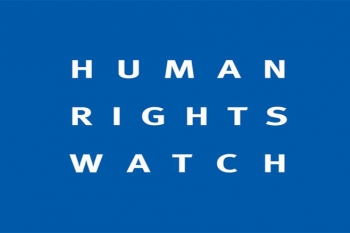 Bahrain cracked down on peaceful dissent during 2018, virtually eliminating all opposition, Human Rights Watch said today in releasing its World Report 2019.
No independent media were allowed to operate in the country in 2018, and ahead of parliamentary elections in November, parliament banned members of dissolved opposition parties from being able to run. Peaceful dissidents were arrested, prosecuted, ill-treated, and stripped of citizenship.

“The Bahraini authorities have demonstrated a zero tolerance policy when it comes to free media, independent political thought, and peaceful dissent,” said Lama Fakih, deputy Middle East and North Africa director at Human Rights Watch. “Despite the stream of arrests and convictions of dissidents, Bahrain’s allies have failed to use their influence to improve Bahrain’s rights record at home or abroad.”

In the 674-page World Report 2019, its 29th edition, Human Rights Watch reviewed human rights practices in more than 100 countries. In his introductory essay, Executive Director Kenneth Roth says that the populists spreading hatred and intolerance in many countries are spawning a resistance. New alliances of rights-respecting governments, often prompted and joined by civic groups and the public, are raising the cost of autocratic excess. Their successes illustrate the possibility of defending human rights – indeed, the responsibility to do so – even in darker times.

In the days leading up to the November parliamentary elections, the government detained a former member of parliament, Ali Rashed al-Asheeri, after he tweeted about boycotting the elections. He was released on bail three days after the election. On November 4, the Bahrain High Court of Appeals overturned the previous acquittal of a prominent opposition member, Sheikh Ali Salman, sentencing him to life in prison on espionage charges. Salman is the leader of Bahrain’s largest political opposition group, al-Wifaq, which wasoutlawed in 2016.

Nabeel Rajab, one of Bahrain’s preeminent human rights defenders, completed a two-year prison term for “spreading false news” in June. He then immediately began a five-year prison term for his tweets criticizing alleged torture in Bahrain’s Jaw Prison and the Saudi-led military campaign in Yemen. Duaa al-Wadaei, wife of a prominent exiled activist, Sayed Ahmed al-Wadaei, was sentenced to prison in absentia on March 21 for allegedly insulting an officer at the Manama airport in 2016.

In September, three female human rights defenders held in the Isa Town Prison, Hajer Mansoor Hasan, Najah Yusuf, and Medina Ali,said that prison officials assaulted them and restricted their family visits, phone calls, and time spent outside of their cells. The National Institution for Human Rights dismissed these allegations.

The oversight bodies that government set up in 2012 in response to a recommendation by the Bahrain Independent Commission of Inquiry (BICI) once again in 2018 did not investigate credible allegations of prison abuse or hold officials who participated in and ordered widespread torture during interrogations since 2011 accountable.

Despite significant human rights concerns in Bahrain and its participation in the Saudi-led coalition in Yemen, which is committing serious violations of international humanitarian law, the United States State Department approved five major weapons sales to Bahrain between January and November.