Bahrain: 8 years on from 2011, Reform and Accountability Remain a Mirage 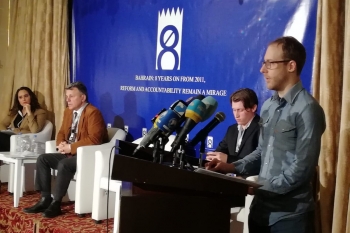 A conference on the human rights situation in Bahrain was held in Beirut, on the 13th of February 2019 with the participation of international human rights organizations, experts, CSOs, activists and researchers. Members of prominent organizations such Human Rights Watch, FIDH, Amnesty International, Index on Censorship, and others have participated in the discussions of the topics of the conference.

All participants have agreed on the need for accountability to deal with the ongoing deterioration of the human rights situation that has been happening since 2011.

Some of the topics discussed revolved around the status of women HRDs, the shutdown on Freedom of Expression, the forms of electronic repression, the failure in implementing the BICI recommendations, and the lack of accountability in Bahrain.

Among the participants, some of the important statements were:

The head of FIDH, Dimitris Christopoulos, said that “Treating Nabeel Rajab the way they did shows that human rights defenders threaten their system by advocating peace".

The Advocacy Officer at Salam DHR, Joshua Cooper, said that “it is clear that BICI process has long come to a halt. To answer why, involves answering why human rights as a whole have regressed in Bahrain, including in the absence of any political transition, the use of sectarian and security narratives, and a lack of international support.”

Jodie Ginsberg the CEO at Index on Censorship commented that “I expect to see a clear commitment from Bahrain's allies that continued cooperation is dependent on Bahrain's commitment to uphold universal human rights.”

Aya Majzoub, the researcher at Human Rights Watch, declared that “the recent victory in Hakeem Al-Araibi’s case proves that the effort to put pressure on Bahrain has been successful in order to reform its human rights record .”