Women And Children Under Repression 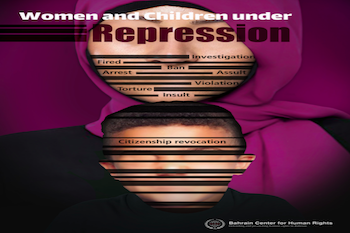 Bahrain Center for Human Rights issued a new report entitled “Women and Children under Repression”, on the occasion of International Woman Day, in both, English and Arabic languages. The report is published to highlight the status of Bahraini woman under the Bahraini laws and decrees violating women's rights.

In the report, the Center examines Bahrain's laws and legislations restricting the freedom of women and children and shows the extent of its non-conformity with the international treaties, covenants and agreements especially the Convention on the Elimination of all Forms of Discrimination Against Women (CEDAW). The report also documented abuses against women since the popular protests beginning in 2011.

The report concluded with recommendations to the Government of Bahrain urging them to release all detained women. The report has also recommended enacting the Bahraini Nationality Act (2014), that guarantees the right of the individual in all matters relating to nationalities; Granting citizenship to every Bahraini child who has been stripped of his nationality and compensated for every right he was deprived of when he was stateless and; Amend the law to allow the Bahraini mother to transfer her nationality to her child.