USCIRF: Bahrain as a Tier 2 country “for engaging in or tolerating religious freedom violations 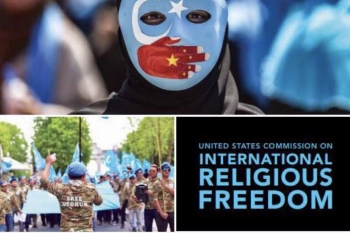 THE U.S. COMMISSION ON INTERNATIONAL RELIGIOUS FREEDOM (USCIRF) issued its annual report in April 2019. The report was published to monitor religious freedom abroad and makes policy recommendations to the president, secretary of state, and Congress. The 2019 Annual Report documents religious freedom violations and progress during calendar year 2018 in 28 countries and makes independent recommendations for U.S. policy.

The report is divided into three sections. The first section focuses on the U.S. government’s implementation of IRFA and provides recommendations to bolster U.S. efforts to advance freedom of religion or belief abroad. The second section highlights 16 countries USCIRF concludes meet IRFA’s standard for “countries of particular concern,” or CPCs, for the period covered by this report, which USCIRF refers to as Tier 1 countries. The third section of the Annual Report highlights 12 countries USCIRF categorizes as Tier 2, defined by the Commission as nations in which the violations engaged in or tolerated by the government during 2018 are serious and characterized by at least one of the elements of the “systematic, ongoing, and egregious” CPC standard.

In 2019, USCIRF places Bahrain on its Tier 2 for engaging in or tolerating religious freedom violations that meet at least one of the elements of the “systematic, ongoing, egregious” standard for designation as a “country of particular concern,” or CPC, under the International Religious Freedom Act (IRFA).The part related to Bahrain concluded with recommendations to the US  government. The most important of these recommendations was to urge the Bahraini government to clarify the terms and enforcement of the 2016 amendment to article 5 of the 2005 Political Society Law, which prohibits religious figures from “inciting hatred,” and repeal articles 309 and 310 of Bahrain’s Penal Code that impose fines and jail time for blasphemy.