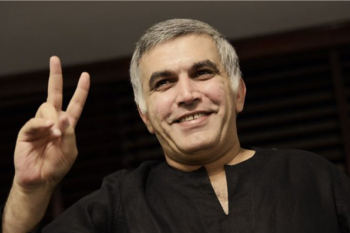 On 17 September 2019, the Court of Appeal will hold a hearing on the application submitted by the legal team defending human rights defender Nabeel Rajab to consider altering the charges against him by community service as stipulated in the Alternative Penal Code.

The Bahraini authorities arrested Rajab on 13 June 2016 from his home and he has been detained since then.  On 15 January 15 2018, the Court of Cassation upheld Rajab's two-year prison sentence handed down due to the 2015 television interviews he gave on the human rights situation in Bahrain. In another case, Bahrain's Court of Appeal, on 31 December 2018, upheld the sentencing of Nabeel Rajab to five years in prison on charges related to freedom of expression and tweeting about the war in Yemen.

Rajab is subjected to poor conditions in Jaw Central Prison where he is currently detained. Since he was transferred to Jaw Central Prison after being sentenced, he has been held in isolation from other human rights defenders and politicians, and is being held in a cell with nine other prisoners who have been sentenced in cases related to prostitution, which has affected Rajab's psychological state.

The Bahrain Center for Human Rights (BCHR) strongly condemns the conditions under which Nabeel Rajab is being held, conditions which violate the United Nations Standard Minimum Rules for the Treatment of Prisoners, in particular rule C concerning detainees and persons in pre-trial detention. BCHR therefore calls on the Government of Bahrain to:

- Let Rajab serve his sentence through community service, as according to the alternative penal code at least.

- Stop isolating Rajab from other human rights and political prisoners.