Bahrain: The Deprivation of Life 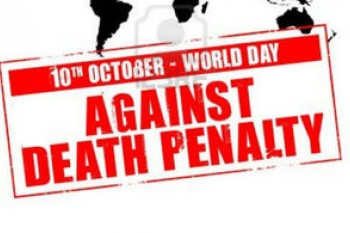 On the occasion of the 17th World Day Against the Death Penalty, The Bahrain Center for Human Rights (BCHR) condemns the ongoing use of death sentences in Bahrain and call for the abolition of this practice in the kingdom. This anniversary comes at a time when detainees in Bahrain are exposed to the most severe violations of the basic rights.

Bahrain’s use of the death penalty is in breach of Bahrain’s international commitments. While the Universal Declaration of Human Rights and the International Covenant on Civil and Political Rights make clear that all people are entitled to the equal protection of the law without discrimination, Human Rights Defenders are either in prison, exile or under threat. Whoever expresses his views is harassed, arrested or has his family members targeted as a tool of pressure to stop his activism. Death penalty is the most brutal of all shapes of restrictions which authorities in Bahrain apply to guarantee a complete closure of civic and political space.

In Bahrain, death sentences continue to be imposed in violation of major international standards, including the right to a fair trial and the principle of non-discrimination.  The most recent cases were on 27 July, 2019, when authorities in Bahrain executed both victims of torture Ahmed al-Mullali and Ali al-Arab. On 06 May 2016, the Supreme Court of Appeals upheld the death sentence of detainees Ahmed Issa al-Mullali and Ali Ahmad al-Arab. The court largely based its judgment on confessions obtained under conditions of torture of Al-Mullali, Al-Arab and others, where detainees were subjected to ill-treatment and incommunicado detention in circumstances that can be considered as enforced disappearance. The executions took place despite reported concerns that the convictions were based on confessions extracted under torture.

BCHR and other human rights organizations have repeatedly called on Bahraini authorities to restrict the use of the death penalty and reduce the number of crimes susceptible of such punishment. Today, BCHR reiterates its concern over the continued use of the death penalty in Bahrain, and also calls on the International Community, including the High Commissioner for Human Rights, to support the adoption of the resolution calling for a universal moratorium on the death penalty.

Therefore, BCHR call on the government of Bahrain to: