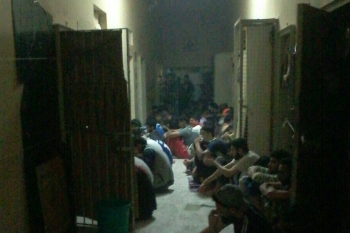 The last week of January 2020 was alarming in regards to the ill-treatment and neglect of medical care provided to prisoners of conscience.

One week ago, the prisoner, Elias Al-Mulla, (sentenced to 15 years), was released after spending five years in prison while suffering from cancer, after a campaign calling for his release in order to receive medical care after years of neglect that led to the aggravation of his health situation.

On Friday 31 January 2020, the former prisoner Hamid Khatam passed away; Khatem was released in 2017, a year after his arrest, as a result of his illness, and to receive treatment abroad, but he recently suffered a setback and passed away.

The Bahrain Center for Human Rights (BCHR) still emphasizes on the need to develop ways of dealing with prisoners in accordance with international norms and laws, as well as providing medical treatment for the patients among them and improving prison conditions in terms of providing adequate medical care and developing the general environment of health facilities. It was reported that there is lack of hot water in Sanitation in the winter and this is one of the causes of sicknesses, as well as the low level of hygiene in prisons and detention centers, due to the limitation of cleaning materials and even the prevention of prisoners from purchasing them.

BCHR considers that the conditions of prisons in Bahrain need to be fundamentally and comprehensively addressed, ensuring that prisoners receive all their legitimate rights, and to improve the general situation in places of detention and imprisonment. That is especially needed since mass issues have occurred such as collective poisoning or mass infections such as scabies, and some other skin diseases. The affected were transferred to isolated wards, which further intensified their health and psychological suffering.

There is also a continued complaint of neglect in providing medical treatment, and of the poor level of health care in the prison clinic, which is usually limited to the dispensing of painkillers, which leads to the continuation of diseases and even their aggravation. That is of course, along with the difficulty of obtaining a transfer of emergency cases quickly to central public hospitals including difficult and chronic ones such as sickle cell anemia and cancer, as in the cases of Al Mulla, Khatem, and others.

It is a matter of concern that the Bahraini authorities continue to market the idea that prisons in Bahrain adhere to the highest standards of prisons in the world, which is an incorrect claim that is not supported by facts, as evidenced by the persistence of complaints of preventing prisoners from receiving treatment even in difficult and advanced cases of illness. It was reported as well, that prisoners complain of the lack of medication for patients, as well as continued ill-treatment and solitary confinement . Last October, Human Rights Watch issued a report on seven sick detainees (including al-Mulla) subjected to health neglect, and demanded their release and the cessation of reprisals. Also, last November, four UN experts published a letter to the Bahraini authorities that included ten cases of political prisoners subject to medical neglect.

The Bahrain Center for Human Rights considers that it has become urgent for the authorities in Bahrain to adhere to the following: