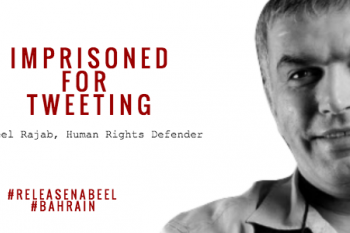 Today, February 4, 2020, Nabeel Rajab, who is prominent human rights defender and Deputy Secretary-General of the International Federation for Human Rights (FIDH), is entering his fourth year in detention, after he was sentenced to several years in prison for his activities, defence, peaceful commitment, and calls to respect human rights.

BCHR recalls that Rajab has been detained since his arrest on 13 June 2016 until this moment and has been placed in solitary confinement most of the time during the first nine months after his arrest, in violation of United Nations laws regarding pre-trial imprisonment, and that Rajab was subjected to ill-treatment. His books, clothes and personal belongings were confiscated and his cell was repeatedly raided at night.

On December 31, 2018, the Court of Cassation upheld a five-year prison sentence on Rajab, on the background of his tweet on his Twitter account claiming torture in prisons and criticizing Bahrain's participation in the Saudi-led military campaign against Yemen.

Rajab, who has already spent two years on other charges related to peaceful expression, is slated to remain behind bars until 2023. It appears that he has at times been subjected to negligence in medical treatment that may amount to arbitrary punishment, causing his health to significantly deteriorate.

It is noteworthy that, in August 2018, the United Nations Working Group on Arbitrary Detention called for the immediate release of Nabeel Rajab, saying that his detention was not only arbitrary, but also constituted discrimination based on political or other opinions, as well as on his status as a defender of human rights.

The case of Rajab is part of a much broader campaign. Since 2012, Bahrain’s courts have sentenced at least 40 Internet users to more than 842 months in prison for expressing on the Internet, and Bahrain’s Minister of the Interior, Lieutenant General Sheikh Rashid bin Abdullah Al Khalifa, recently announced another campaign against citizens who criticize the government on social media.

In light of all of the above, the Bahrain Center for Human Rights urges the Bahraini authorities to release Nabeel Rajab immediately and without any restriction or condition, to cancel the judgments against him, drop all charges against him, and to pledge an immediate, impartial, independent, and effective investigation of his allegations of mistreatment during periods of time of his imprisonment. BCHR also called on the results of this investigation to be made public and any suspects with criminal responsibility to be brought to justice within fair, transparent and impartial procedures.